What does the data say?

This is Zimbabwe’s staple grain. Maize production from the 2020/21 season was reported to be 2.7 million tonnes, the highest since 1984.

Official statistics show that communal farmers, who have traditionally produced the bulk of Zimbabwe’s maize, had the largest sectoral output, at 988 782 tonnes. This was followed by the sector commonly known as the A1 segment, made up of communal farmers resettled on 6 hectare plots since the onset of the government’s land redistribution drive in 2000. The A1 farmers produced 706 372 tonnes of maize in the 2020/21 season. Combined, the communal and A1 farmers, segments that are overwhelmingly black dominated, produced 62% of Zimbabwe’s maize in the last farming season. The trend was the same in 2019/20, when communal and A1 farmers produced a combined 511 000 tonnes, or 56% of the total 908 000 tonne output for that season. Communal and A1 farmers’ contribution to maize production was 58% and 56% in the 2017/18 and 2018/19 seasons, respectively. 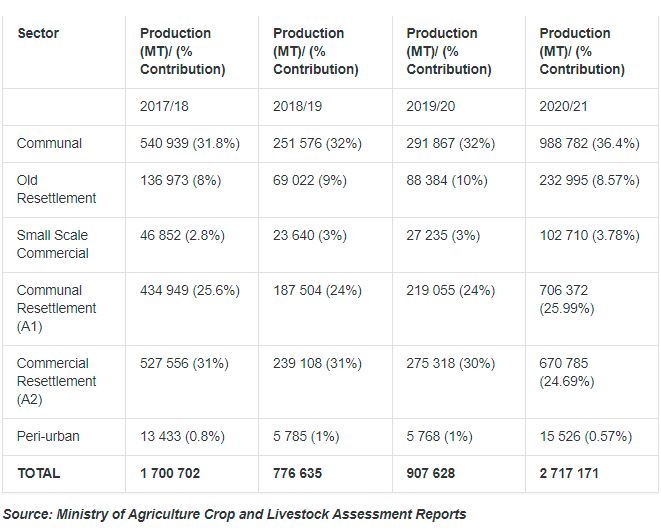 The data shows that black farmers have accounted for at least 58% of Zimbabwe’s maize production. The contribution is higher, as this statistic does not include the output from black farmers in the commercial sector, whose data could not be disaggregated. It is incorrect to credit white farmers with “tending most of the maize crop”, as claimed by the Bloomberg article.