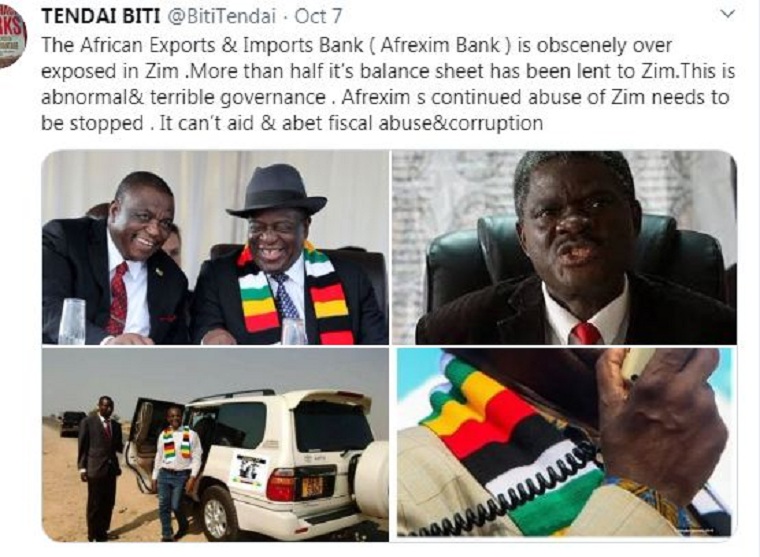 Movement for Democratic Change Alliance vice-president Tendai Biti has taken a swipe at Zimbabwe’s foreign currency auction system claiming it is rigged and is financed through a loan from the African Export-Import Bank which he said was “obscenely over exposed in Zimbabwe.”

“More than half its balance sheet has been lent to Zim. This is abnormal& terrible governance. Afrexim’s continued abuse of Zim needs to be stopped. It can’t aid & abet fiscal abuse &corruption,” Biti tweeted last week.

Biti’s statement, according to the Zimbabwe fact-checking organisation, Zimfact, is totally false.

There is therefore no way its loans to Zimbabwe can be more than half its balance sheet.

The foreign currency auction system has stabilised the local currency which  has appreciated against the greenback over the past six weeks.

It is not clear how the local currency will fare at today’s auction but Biti claimed in another tweet: “The RBZ’s rigged auction system is being financed by a loan from the Afrexim Bank secured by Zimbabwe s gold deposits. The said loan is a nullity. Parliament has not approved same. Further Zim law does not allow securitization of minerals. Afrexim Bank has gone rogue.”

Biti, who was Finance Minister during the inclusive government from 2009 to 2013, and is currently chairman of the Public Accounts Committee, has been at Finance Minister Mthuli Ncube’s throat since Ncube was appointed in September 2018.

Ncube has, however, accused Biti for putting the country into the mess it is in today because he had destroyed the country’s ability to conduct its own monetary policy.