Zimbabwe war veterans statement continues to cause a stir 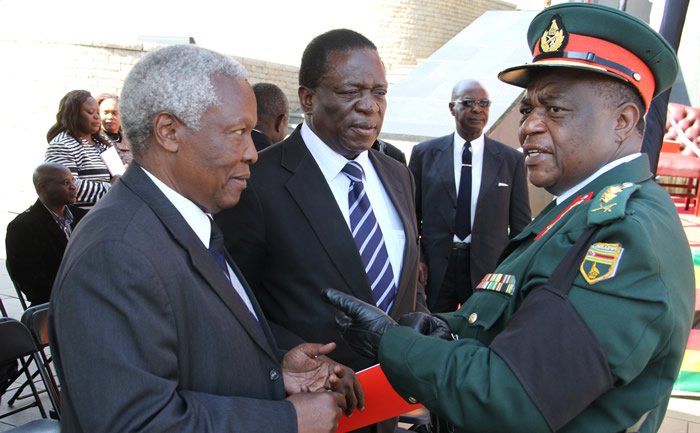 A statement by Zimbabwe’s war veterans in which they called their Patron President Robert Mugabe a dictator who had ditched the veterans of the struggle in favour of party youths known to be loyal to Mugabe’s wife, Grace, continues to cause a stir with claims that it was issued by rogue elements and that it is the work of Fifth columnists.

The latest denouncement comes from Defence Minister Sydney Sekeramayi who said it was now apparent that no one seemed to want to be associated with the document.

“Both at party and government level we’ve looked at the document, studied it and we’ve checked with some of the people who were at the meeting and up to now nobody is honouring and associating himself or herself with that document,” he told The Chronicle.

“It becomes absolutely necessary to carry out thorough investigations and get to the root of the matter. Whenever there is a meeting of the party or war veterans, as you know, resolutions are signed for or honoured. Hapana arikuti ini ndini chaiye chaiye mangwinya wacho akanyora document irori,” he said.

No one, however, denies that war veterans met last Thursday.

So far the only notable war veteran who has distanced himself from the statement is Joseph Chinotimba who was showered with praise by President Robert Mugabe last year. Mugabe also quipped that Chinotimba should actually lead the war veterans association.

Sekeramayi said the document could be the work of the country’s detractors using infiltrators.

“You also get a situation that it might be our enemies. In any organisation there are people who are persuaded whom we normally refer to as the Fifth Column. They might be used by our enemies to infiltrate us. A treacherous document of that nature is not just written without people converging and agreeing on points to make. There is no war veteran who would be so disparaging about the President of the party and country. It’s impossible,” he said.

“If there are problems, people put their heads together to see how they can address them in order of priority. You don’t go out to the extent that the private media is feasting. They are saying they have never had such a scoop. If you see the British and the Americans celebrating that (President) Mugabe is being attacked, then you begin to ask who is behind this. The truth will come out. The majority of the war veterans should always know that the patron is there, the party is there and they will never be abandoned. Challenges will always be addressed. Let us put our heads and energies together.”

The document was issued two days after war veterans leader Christopher Mutsvangwa was expelled from Parliament and three weeks after he was fired from the party.

At their crucial meeting with Mugabe in April, the war veterans called for a stop to the expulsion of party members.

Mutsvangwa told the media in March that the Mugabe he had known for 40 years was no longer there.