US sanctions on Zimbabwe are not about human right but... 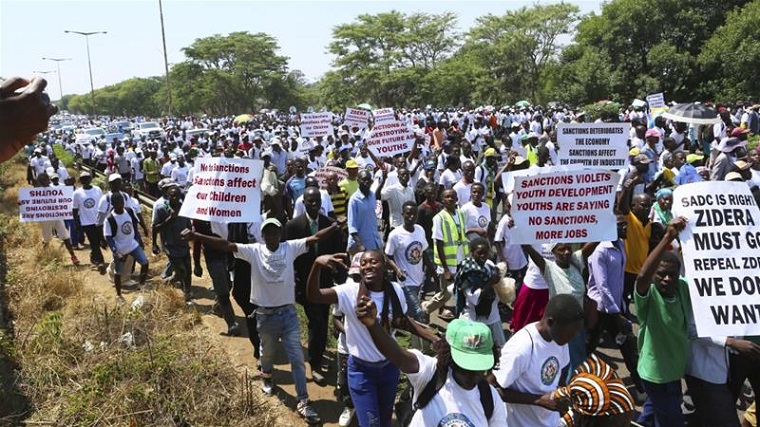 United States sanctions on Zimbabwe are not about human rights per se but are about its economic interests and getting a pro-US government in power.

This was clearly demonstrated by US ambassador to Zimbabwe, Joseph Sullivan, shortly after the Zimbabwe Democracy and Economic Recovery Act came into force way back in 2003.

In a diplomatic cable to Washington entitled: AFTER MUGABE: POST RECOMMENDATIONS FOR A US RESPONSE, dated 4 June 2003, Sullivan said the US government should guarantee projects for three companies- General Electric, Caterpillar and Boeing, to capitalise on any reform.

“In a reform environment, we also recommend OPIC and ExIm Bank consider loan guarantees for projects that promote US exports and shore up Zimbabwe’s dilapidated infrastructure,” Sullivan wrote.

“Furthermore, the country’s participation in African Growth and Opportunity (AGOA) sessions as an observer (with full admission following free and fair elections) would allow Zimbabwean firms to plan a reentry into the US market.

“We should also explore possibilities for including Zimbabwe in free trade negotiations with the Southern Africa Customs Union.”

Even in the executive order which is renewed every year to extend sanctions on Zimbabwe, sanctions are extended because actions of the Zimbabwe government “pose an unusual and extraordinary threat to the foreign policy of the United States”.

The latest extension signed by President Joe Biden this year reads:  “President Emmerson Mnangagwa has not made the necessary political and economic reforms that would warrant terminating the existing targeted sanctions program.

“Throughout the last year, government security services routinely intimidated and violently repressed citizens, including members of opposition political parties, union members, and journalists.  The absence of progress on the most fundamental reforms needed to ensure the rule of law, democratic governance, and the protection of human rights leaves Zimbabweans vulnerable to ongoing repression and presents a continuing threat to peace and security in the region.

“The actions and policies of certain members of the Government of Zimbabwe and other persons to undermine Zimbabwe’s democratic processes or institutions continue to pose an unusual and extraordinary threat to the foreign policy of the United States.

“Therefore, I have determined that it is necessary to continue the national emergency declared in Executive Order 13288, as amended, with respect to Zimbabwe and to maintain in force the sanctions to respond to this threat.”

If sanctions were really about human rights, why did the European Union lift its sanctions except only on three people and the Zimbabwe Defence Industries?

Here is a list of US companies that were doing business in Zimbabwe some of which have since left the country.