Chinese company to train Zimbabweans in diamond cutting and polishing 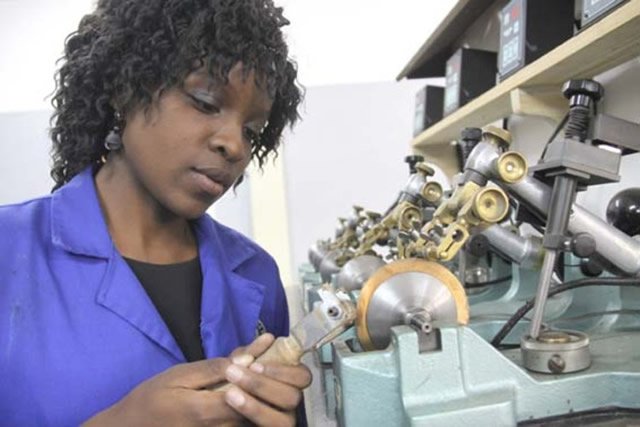 A Chinese company will train 300 Zimbabweans in diamond cutting and polishing over the next three years, Mines Minister Walter Chidhakwa said yesterday without disclosing its name.

He, however, said the company was based in Hong Kong and has over 2 000 retail outlets of jewellery in Asia and is building another 2 000 stores through which they wish to distribute their jewellery.

The programme is being done jointly with the School of Mines in Bulawayo.

Chidhakwa was responding to a question from Chegutu West Member of Parliament Dextor Nduna who wanted to know the progress so far made in training locals in diamond cutting and polishing.

Chidhakwa said the training was being done by a Chinese company which had already recruited 25 Zimbabweans who would be trained in China for a year. The company would, however, train 300 Zimbabweans over the next three years jointly with the School of Mines.

Asked by Southerton legislator Gift Chimanikire whether the Chinese were the best trainers bearing in mind the fact that one of their companies was responsible for the disappearance of $15 billion, Chidhakwa responded: “Mr. Speaker Sir, this company that I refer to is one of the largest value adding companies, not just in diamonds but also in platinum and gold jewellery.

“This company has over 2 000 retail outlets of jewellery in Asia and building another 2 000 stores through which they wish to distribute their jewellery.  It is based in Hong Kong and has a very strong work ethic.

“This however, does not mean that this is the only company.  We are actually in negotiation with other companies that are willing to assist us with cutting and polishing to benefit from the package of incentives.

Asked by Prince Sibanda of Binga North whether the programme would not be compromised because the ministry’s permanent secretary Francis Gudyanga sat on three boards, Chidhakwa said this was temporary. The permanent secretary would be removed once suitable directors had been appointed.

“We found it difficult to appoint a board of directors (for the Minerals Marketing Company of Zimbabwe) when at a material time it had expired to appoint a board of directors for an organisation that we were dissolving.  We did not think that it made sense to call people and say, we are appointing you for three years.  Then come back to them and say, however we may dissolve the organisation in six months and you may have to go home.  We thought it was not necessary for us to do that as it would inconvenience members of the public who would have been appointed to such a board.

“We could also not appoint a board of directors for Marange Diamonds, as you very well know, for an organisation that we knew was going to be subsumed by the Zimbabwe Consolidated Diamond Company (ZCDC) as has happened now. We have appointed some members of the Board of Directors but we had a few problems with members of ZCDC.  So once we finish, then the Secretary will obviously cease to be on any of the Boards of Directors.”