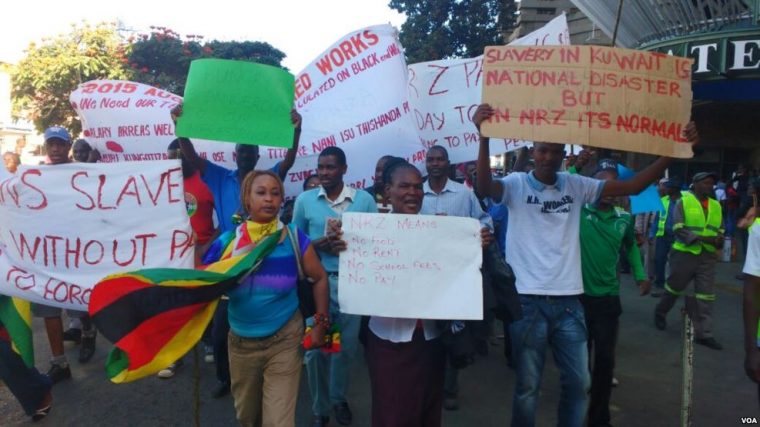 Transport and Infrastructural Development Minister Joram Gumbo told a conference to discuss the ZimAsset economic blueprint at the weekend that NRZ presently employs about 5 700 workers, much higher than the company can support while operating at the current level of 30 percent of capacity.

“At the moment, NRZ is overemployed with about 5 700 workers and this figure is high compared with the capacity at which the railways company is operating. There is need to embark on a staff rationalisation programme in relation to the business NRZ is generating,” he said.

The parastatal owes its employees over 15 months’ worth of unpaid salaries, amounting to a total of $87 million. The workers have been on strike since March, demanding to be paid their dues.

At its peak, NRZ employed about 20 000 workers and moved 18 million tonnes of freight annually. NRZ now moves less than 100 000 tonnes per week, the effects of industry collapse and poor rail infrastructure.

“Industry in Bulawayo has scaled down considerably due to various economic factors. We hope all stakeholders will work together to revive industry, and hence revive the NRZ and indeed all other sectors of our economic environment,” said Gumbo.

NRZ is one of the 10 strategic parastatals targetted under a transformation programme designed to aid economic recovery.

Zimbabwe has 91 state owned enterprises, many of which are loss making. At their peak, state enterprises contributed up to 40 percent of the country’s gross domestic product (GDP), but they have been dragged down by legacy debt, corruption and mismanagement.

“I’m aware of the nation’s expectations on the need to reverse the downward trend of the NRZ over the past decade. My ministry is working flat out to secure funding for the recapitalization of the institution,” said Gumbo but declined to elaborate, saying the negotiations were “very delicate.”

Last year, the government said it was in discussions with the Development Bank of Southern Africa for a $650 million loan facility to rehabilitate NRZ infrastructure.

The company says it needs least $2 billion in the long-term to restore full viability.- The Source