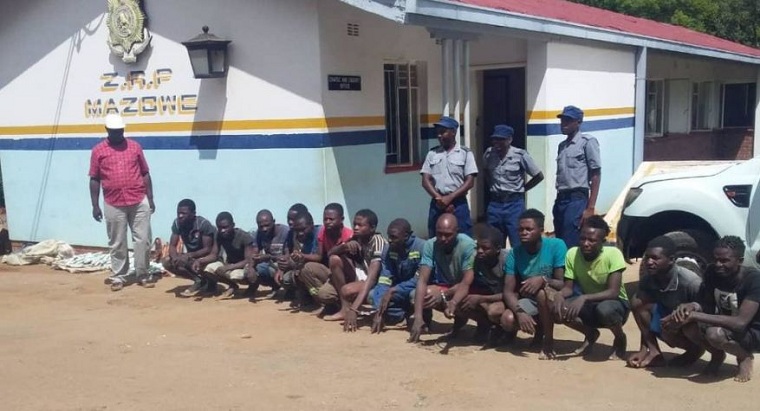 How much gold is Zimbabwe producing? No one knows. What is known is the gold that is delivered to the Reserve Bank of Zimbabwe’s Fidelity Printers. But reports say this could be as little as a third of what the country produces.

Economist Eddie Cross wrote last month that it is estimated that over 500 000 small scale miners operate in the country.

“We have no idea what they produce but we know a network of criminal gangs has sprung up and the buyers use whatever means are necessary to control the sale of the precious commodity,” he wrote.

“If they only produce a gram a week – its gold worth US$1.4 billion. It is clear that the real output is much higher than this.

“Rumours and gossip from South Africa say that they handle 80 tonnes or more from Zimbabwe at their refineries. The Reserve Bank bought over 25 tonnes last year and this would put gold sales from Zimbabwe at over US$5 billion a year. Bigger than Marange.

“Instead of this wealth finding its way to the miners and their families, they receive only a fraction of the value of their hard earned production. A recent study says they get less than half the world market price. Fortunes are being made, but by who?”

Indeed, by who? And if you add Dubai, the production could even be higher.

Finance Minister Mthuli Ncube yesterday conceded that gold production had actually increased but it is not finding its way to Fidelity Printers.

“The gold price has gone up because that is a refuge point when in times of crisis because of the COVID-19 crisis, but the deliveries at Fidelity have dropped and that has to do with various things like matsotsi who are taking gold out and all manner of things,” he told the Senate.

“We are dealing with them, but we also dealt with the other thing which was a retention issue.  We changed retention ratio from 45:55 to 70:30 in favour of the miner.  So at least we have done our part as Government.

“We still have to deal with the illicit side.  So when we say gold output has gone down, it is not really correct.  Technically, in a sense, it is about official deliveries to Fidelity but the actual gold output out there has gone up.  We know that only that pane matsotsi, otsotsi bayakhupha igolide leliyana.  That is our problem, but the future is bright with the mining sector.”