What Zimbabwe has spent on key infrastructure projects this year Zimbabwe is spending more on public infrastructure, among them its centerpiece projects such as the Beitbridge highway and dams.

This is despite concerns, including from government itself, over the impact funding projects from the budget has on inflation.

In his latest mid-term statement, Finance Minister Mthuli Ncube provides updates on how much he is spending on public infrastructure.

Here is a summary of the infrastructure spending:

The 2022 budget put $334.7 billion into the capital budget, which includes infrastructure. Of this money, $141.4 billion had been used by June, mostly for roads and dams. Mthuli will spend $172.6 billion more on projects, which brings the capital budget for the year to $507.3 billion.

To fund this spending, Mthuli says he will issue Treasury Bills, a form of borrowing locally. This includes issuing a US dollar bond of US$100 million on the Victoria Falls Securities Exchange (VFEX). The money raised will be for roads, health, and irrigation. Government also wants to draw the equivalent of $60.6 billion from IMF funds, which are yet to be disbursed.

For roads, government spent $25.7 billion in the first half of 2022. Most of this money went into the Harare-Masvingo-Beitbridge highway, which got $12.7 billion. The rest went into the Emergency Roads Rehabilitation Programme (ERRPII), which targets urban and rural roads.

By June, 327km of the 520km targeted on the Beitbridge highway had been done. An additional $33.2 billion has been budgeted to complete 100km by year-end.

The ERRPII got $13 billion during the first six months. A further $3.7 came from the Road Fund, while another $8.5 billion will be added to this budget.

A total of $16.8 billion was spent on water projects, such as dam construction, drilling rigs and borehole drilling. The supplementary budget is spending another $18.5 billion for dams and water resources. A total of $2.1 billion went into irrigation projects.

The Gwayi-Shangani dam got $6.7 billion this year. Other projects include Chivhu Dam – which will be commissioned by the end of the year – as well as Kunzvi, Vungu and Ziminya dam projects, where contractors are now on site.

Government is spending an additional $514 million for the Air Traffic Control Communications System.

Zimbabwe has also paid US$5.7 million of a US$6.1 million contract to procure new radar equipment. Three have been delivered and are being installed. Another two radars “are in transit” and will be installed by year-end.

Zimbabwe is using a loan of US$998 million to fund the construction of two new generator units at Hwange. Combined, the two would add 600MW. So far, Zimbabwe has used US$443 million of the loan, while another US$334 million will be spent by the end of the year. The government spent $138.6 million on local costs and plans another $1 billion this year for the same purpose.-NewZWire 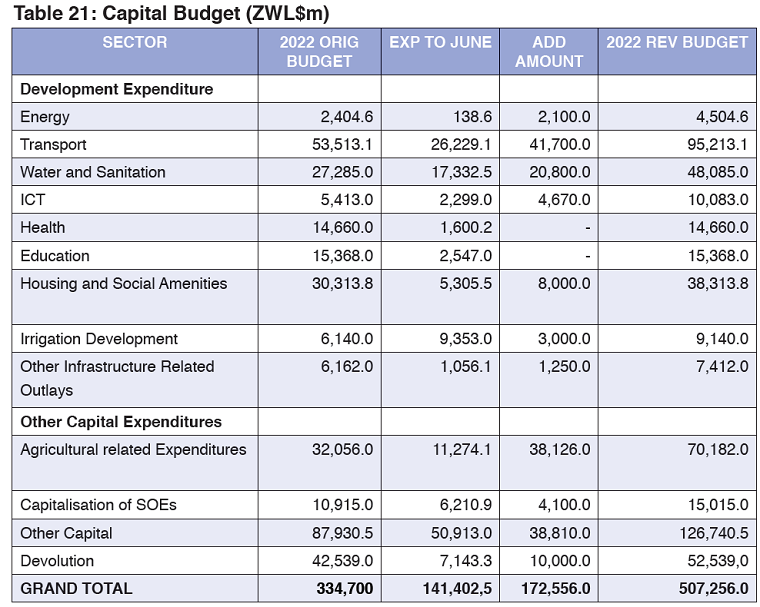