US has let Trump get away with a lot of... 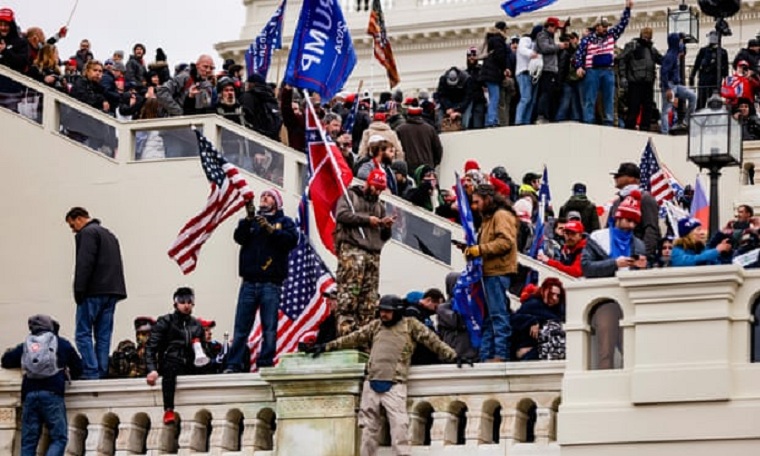 Whiplash is an inadequate metaphor.

It didn’t feel quite like whiplash to live through the horror of Wednesday’s insurrection, followed by the mundanity of Trump bestowing the nation’s highest honor on some golfers Thursday morning. It felt more like coming to a complete stop and then having the back of one’s neck whacked with a five iron.

A swift return to the typical Trump news cycle is simply incompatible with the moment at hand.

Usually, it goes like this: Trump does something unforgivable, people are outraged, right-wing media both minimizes and both-sides it, people get mad about that, and then we all move on.

Things may turn out differently this time—Chuck Schumer has expressed interest in reconvening Congress in an effort to remove Trump from office—but too much of it feels dangerously the same as ever.

If the Trump-incited coup attempt doesn’t bring the country back to a shared reality and change anything substantially, what in the world would it possibly take to do so?

The rallying cry at the start of Trump’s presidency was to not normalize him. John Oliver did an episode about that idea, lots of easily caricatured pussy-hat wearers and Fast Company columnists (myself included) adopted it, and it ultimately became a cliché.

But a funny thing happened on the way to it becoming trite to urge people against normalizing Trump: We did normalize him. That’s why the cycle mentioned above is actually a cycle, rather than a straight line, truncated long ago.

The Unite the Right rally in Charlottesville in 2017 should have been the breaking point, less than a year into Trump’s presidency, when Trump’s most ardent supporters made themselves heard, and Trump was too reliant on their support not to play footsie with them.

That moment should have made Trump appropriately toxic to all Americans who share the country’s supposed values, and marked the start of an early lame-duck presidency.

The storming of Capitol Hill in an effort to overthrow the will of the people is exactly the kind of endgame the president’s many critics always warned about—and it actually happened.

The MAGA faithful gave treason a shot, with explosive devices and the whole works, and some of them died trying to see it through. If their efforts, let alone the Confederate flags and Nazi iconography they brandished at the time, didn’t permanently cement what Trumpism is all about, what would it take to do the trick?