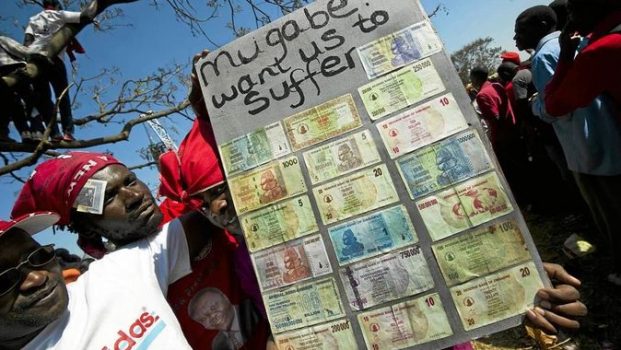 The Reserve Bank of Zimbabwe has announced plans to introduce local “bond notes” to circulate alongside a basket of foreign currencies adopted in 2009, in a bid to ease widespread cash shortages stalking its sluggish economy. This has raised fears of the recurrance of the ill-fated ‘bearer cheques’ that accelarated inflation, which rendered the local currency worthless. The Source interrogates the key questions.

What caused the cash shortages in the first place?

The cash shortages are a combination of various factors. Zimbabwe’s trade deficit, the gap between its exports and imports, has widened from an average $400 million 10 years ago to $2.5 billion at the end of 2015. Zimbabwe imports more than it exports, which means there is more money leaving the country than money coming in. With industry collapsing, more dollars are being used to import goods at a time when the country’s primary exports — commodities — have seen a decline in prices since 2013.

Another factor in the cash shortages is the strength of the US dollar against emerging market currencies such as the Rand. Some reports say, over the past year, the US dollar has gained at the fastest rate in 40 years. This means there is huge demand for the US dollar, which is seen worldwide as a reserve currency.

Finance Minister Patrick Chinamasa said on Wednesday: “For as long as we are using a currency which is appreciating when we have neighbours that have currencies which are depreciating, we become a mopping house. People come to mop up our US dollars. Any US dollars we bring, it will still vanish (as) people want USD as a store of value.”

Added to this mix is weak confidence in the banks, which has seen many businesses, particularly small to medium enterprises and the informal sector, avoiding depositing their money into banks. The central bank estimates that between $3 billion and $7 billion is circulating in the informal sector.

Illicit outflows also contribute significantly to the cash crunch, according to the central bank. As much as $1.8 billion in the form of export sale proceeds and inflated management fees as well as payments for technical and professional services was funneled out of the country in 2015, according to the RBZ.