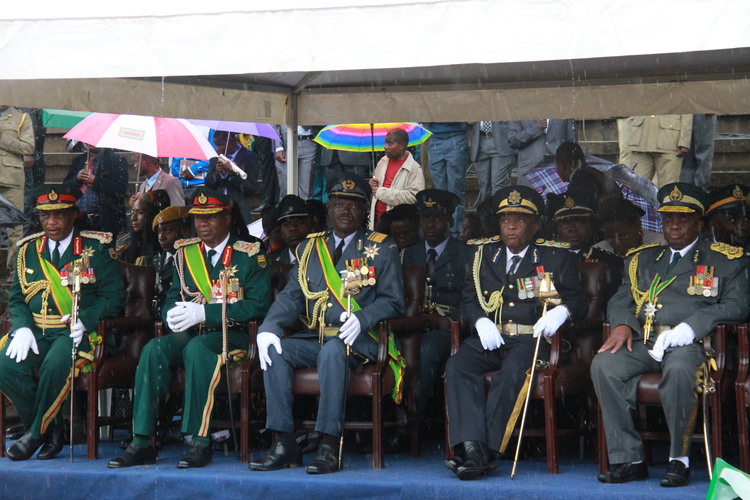 War veterans leader Christopher Mutsvangwa, who was suspended from the Zimbabwe African National Union-Patriotic Front for three years for, among other things, insulting the First lady Grace Mugabe yesterday showed that he was still a force to reckon with when he attended a crucial meeting to set a date for veterans to meet President Robert Mugabe on 7 April.

Mutsvangwa and his entire executive attending the meeting.

Dube, who replaced Mutsvangwa as War Veterans minister, had told the media that Mutsvangwa could not continue to chair the veterans association because he had been suspended from the party. But war veterans stood behind him except Mandi Chimene who also attended yesterday’s meeting.

Mugabe blasted Mutsvangwa last week for allegedly influencing the youth to ditch him because he had overstayed.

“…Kana maakuda kuti vatungamiri vabve, ini ndibve ndinobvaka kana madaro, zvauya nokuparty but zvinokubatsirai here iyezvino,” Mugabe told a rally in Bindura last week implying that if the war veterans asked him to step down, he would so so, but added that his had to be ratified by the party congress.

The next party congress is in 2019, one year after the elections, but the party can call a special congress like it did in 2007. Former army commander Solomon Mujuru called the special congress because he did not want Mugabe to stand as the presidential candidate in the 2008 elections but lost out.

The fall-out between the party and the war veterans seems to have been sparked by Grace Mugabe who accused the war veterans of holding the nation to ransom and personally attacked Mutsvangwa and the security forces at a rally in Chiweshe.

Grace’s speech seems to have incensed the security forces who allegedly confronted Mugabe to rein-in his wife arguing that if he did not do so it meant that he agreed with what she had said.

The meeting set for 7 April is exclusively for war veterans and Mugabe but will include ministers most of whom are also war veterans.

Sekeremayi, who chaired yesterday’s meeting appeared more reconciliatory, saying: “We have found it necessary to have this preliminary meeting so that there is adequate consultation before the meeting with His Excellency, the President.

“We felt that every stakeholder should be involved and prepare together, advise each other so that the meeting with the President is a meeting that will be characterised by frankness and honesty. It will be a successful meeting and a meeting that cements the foundation of our nation. The foundation of our nation in the sense of the party and in the sense of the role played by war veterans in the liberation struggle. It should be a meeting between the war veterans and the President that charts the way forward as we build our country into a prosperous Zimbabwe.

“There are various detractors and those detractors are working day and night, but just as we defeated them during the course of the liberation struggle, we will defeat them and we will have a united Zimbabwe. A Zimbabwe that has got a dynamic economy. A Zimbabwe that we are all proud of. A Zimbabwe that those of our comrades whom we left in mass graves in Zambia, in Mozambique, in Botswana and to some extent in Tanzania they will say ‘yes we didn’t die for nothing. Those who survived the war are continuing the commitment that we had right from the beginning.”

The meeting with war veterans could indeed bring ZANU-PF together as there are fears that disgruntled elements can join former Vice-President Joice Mujuru’s Zimbabwe People First. Most of the fights in ZANU-PF are usually associated with weak opposition.