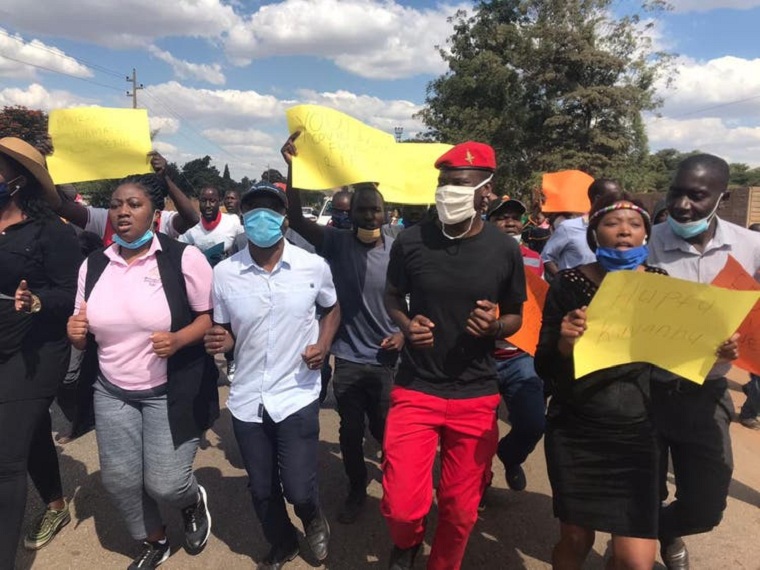 With Zimbabwe currently under a Level 2 lockdown under which big gatherings and demonstrations are outlawed, the MDC Alliance last week held a flash demonstration in the high density suburb of Warren Park in violation of lockdown regulations.

Scores of youths participated in the protest which they said was against “poverty and hunger.”

After the protest, the party alleged three female youth leaders were allegedly abducted and tortured by state agents, a charge which government dismissed.

Police have since launched a full scale investigation into the matter.

In his first public comment on the matter, Mnangagwa said it was important to safeguard lives by refraining from practices that exposed them to Covid-19

“We must never endanger the lives of our people through illegal, reckless and unwarranted demonstrations for political grandstanding. We are one people, one nation, one Zimbabwe,” Mnangagwa said in a terse comment on the opposition demonstration at the burial of national hero, Absolom Sikhosana.

He said Covid-19, which has killed four people and infected 46 in Zimbabwe, was “a real threat to us all and no one is safe or immune from it”.

“Let us keep adhering to World Health Organisation guidelines for preventing its spread,” he said.

The Zimbabwe Human Rights Commission yesterday also told the MDC Alliance to refrain from flouting Covid-19 regulations, and stop engaging in demonstrations that exposed its members to the pandemic.

It advised the party, which has a penchant for violent demonstrations, to use other avenues to have its concerns addressed.

The party often stages demonstrations and abductions ahead of important international gatherings by world leaders such as the UN General Assembly, to win support and sympathy, and soil the country’s image.

In the latest abduction episode, observers believe it was meant to deflect attention away from the bitter factional infighting raging in the MDC Alliance which has led to the recall of some of its parliamentarians from the National Assembly.- New Ziana