Mnangagwa should be wary of Mujuru says UK publication 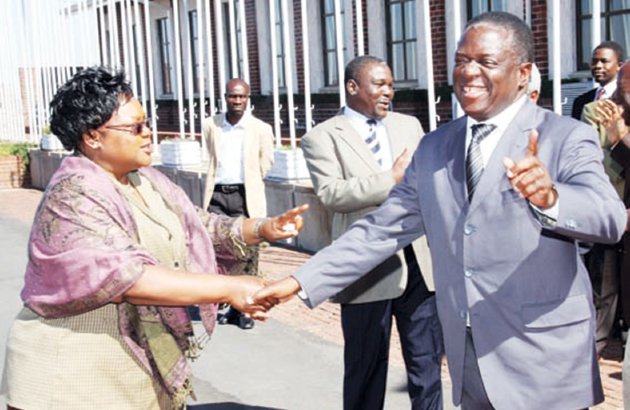 Mnangagwa congratulates Mujuru on being elected VP of ZANU-PF in 2004. Now they are rivals- Pic The Herald

Vice-President Emmerson Mnangagwa should be wary about the entry of former Vice-President Joice Mujuru into opposition politics because her casting out from the Zimbabwe African National Union- Patriotic Front could have been the end, not the beginning, of his chances of succeeding President Robert Mugabe, a London confidential publication says.

Mujuru formally launched her party, Zimbabwe People First, on Tuesday and announced economic policies that were a distinct departure from ZANU-PF where she served in government for 34 years.

“Mujuru's new party is the most important new contender since Morgan Tsvangirai launched the MDC in 2000 (actually 1999), a party which has all but fallen apart from internal divisions. She could bring across strong support from the beleaguered ZANU-PF,” Africa Confidential says in today’s edition.

“But what, her enemies still in ZANU-PF ask, can Mujuru offer that she could not over the last 35 years of working under Mugabe? Courage is one answer. She has broken with Mugabe, and then shrugged off bizarre accusations of plotting against him. Her ZANU-PF supporters have long outnumbered those of Vice-President Emmerson Mnangagwa,” it went on.

“Already, a group of youngish Turks around Grace Mugabe has launched its own plot to scupper Mnangagwa's ambitions to succeed Mugabe. Now Mnangagwa could be caught between Grace and Joice.

“Mujuru is the first ZANU-PF insider with clout and liberation-war credibility to break ranks and offer an alternative to Mugabe. Indeed, Mnangagwa may find that the casting out of Mujuru from ZANU-PF could have been the end, not the beginning, of his chances of succeeding Mugabe.

“The sight of four former ZANU-PF ministers, and ambassadors from Western countries, on the podium at Mujuru's launch event cannot have encouraged him.”