Fifty-five people died of coronavirus in Zimbabwe yesterday making July the second deadliest month with three weeks to go before the end of the month.

There were 854 deaths in January and 246 in February. Last month 195 people succumbed to the virus.

A staggering 2 683 people tested positive yesterday with the virus spread across the entire country. Only two provinces, Mashonaland Central and Matebeleland North, had less than 200 cases.

Manicaland was the worst hit province yesterday with 426 new cases followed by Harare with 302. Active cases rose to 18 961.

Some  1 166 people, however, recovered, 447 of them in Mashonaland West and 200 in Matebeleland South, now the only province with less than a thousand active cases.

Zimbabwe received two million more dosses of coronavirus vaccine on Thursday and intends to distribute 50 000 doses, each, to seven provinces.

Priority will be given to border towns and cities; people’s markets such as Mbare Musika, Renkini and Sakubva; hotspots; tobacco auction floors, GMB depots, cotton depots; and higher and tertiary learning institutes.

Finance Minister Mthuli Ncube said Zimbabwe should attain herd immunity by vaccinating at least 10 million people by the end of the year.

He said the country had so far used US$40 million of the budgeted US$100 million for vaccine acquisition. 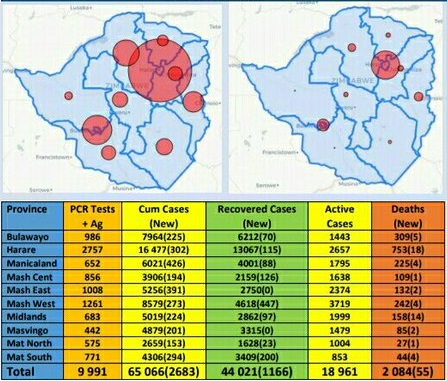