How many Zimbabweans are on exemption permits in South Africa? 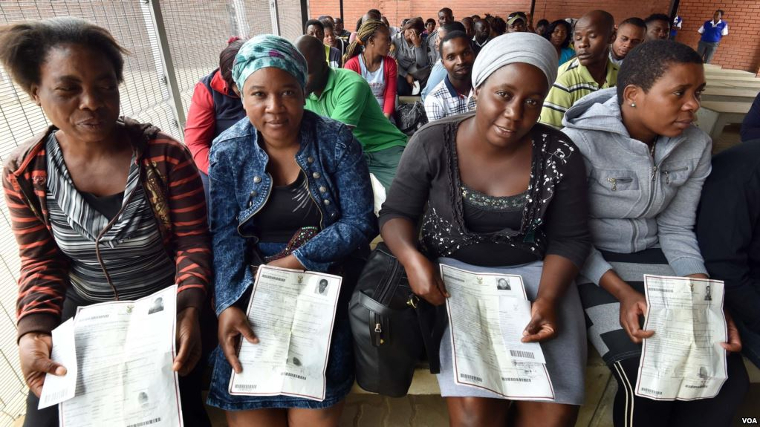 Why are the figures so different? Probably because no one knows the exact number of Zimbabweans living in South Africa. And of course, each one uses their figures to push their point of view.

South Africa says there are about 1.5 million undocumented Zimbabweans in the country.

Britain says there are between 2 and 5 million?
Zimbabwe says only 773 246 Zimbabweans are in South Africa, according to its national census conducted this year.

It is easy to brush off figures released by Zimbabwe on the basis that it is probably downplaying the problem caused by the country’s economic collapse.

South Africa, on the other hand, is using the low number of people that have applied for special permits to close the programme because it has not addressed the main reason why it was started more than a decade ago- to get Zimbabweans to register so that it knows how many are in the country.

South Africa’s Department of Home Affairs says it introduced the programme to regularise the stay of Zimbabweans as it estimated that there were 1.5 million undocumented Zimbabweans in the country.

It was disappointed because only 294 511 Zimbabweans applied for permits under the Dispensation of Zimbabweans Project launched in 2010, according to court papers filed by the department in August this year.

At the time, it estimated that there were about 400 000 asylum seekers living in South Africa.

Things got worse when the South African government introduced special permits for Zimbabweans in 2014.

It expected that all 294 511 Zimbabweans who had applied for the DZP, including 51 780 whose applications had been rejected would apply for the Zimbabwe Special Permit but only 208 967people applied and 197 790 permits were issued.

The figure dropped again when South Africa introduced another special programme for Zimbabweans in 2017, the Zimbabwe Exemption Permit. Only 178 142 were issued ZEP permits.

The department says when these permits were terminated at the end of last year and it asked the handling agency VFS to notify permit holders of the 12-month extension to allow them to seek alternative permits VFS sent out 178 768 emails but 983 letters could not be delivered.

The Department of Home Affairs said in its court filing: “It will be noted that the purpose of the ZEP was to address the fact that a large number of Zimbabweans were residing in the Republic unlawfully. While the ZEP may have assisted initially, it did not have the desired effect. National security is, at least partly, dependent upon knowing the identity and civil status of every person within a country. There remain by the estimates of the department some 1.5 million undocuented Zimbabwean persons within the Republic.”

Britain has its own motive. The more the number of Zimbabweans who have fled their country the better it can push its argument that the country is unstable so there is need for regime change to improve the lives of ordinary Zimbabweans.

Here is what its Junior Minister Gillian Keegan said in Parliament recently: “There are an estimated 300 000 Zimbabweans in South Africa on Zimbabwe Exemption Permits (ZEPs) and we note that the South African Government has extended these permits until June 2023. We are also aware that there are estimated 2-5 million Zimbabweans living undocumented in South Africa….”