Scores of former Steward Bank workers yesterday demonstrated against the bank, accusing it of failing to compensate them following their dismissal from the financial institution last year. 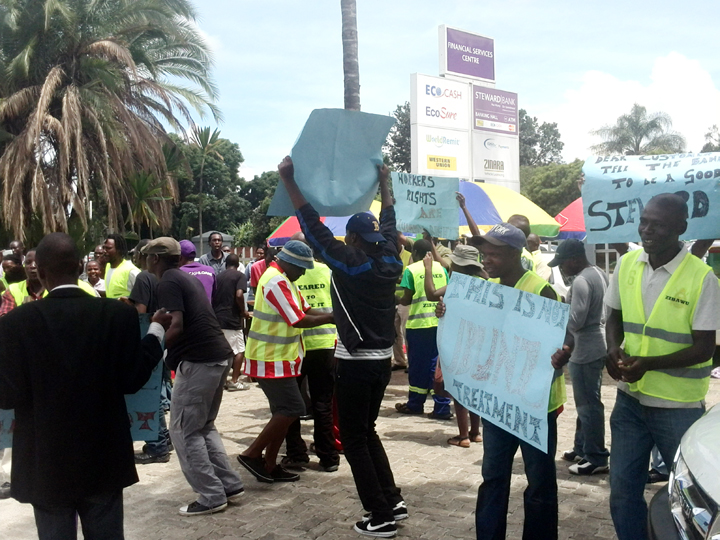 Trade unions estimate that over 25 000 workers lost their jobs as a result of the judgement.

The former workers, with support from the Zimbabwe Banking Allied Workers Union (Zibawu), picketed the bank’s Avondale branch, handing out petitions to Steward Bank clients to appeal to the institution’s management on their behalf, to address their plight.

Besides drum beating and dancing to attract customers attention, they also waved placards with messages that read, “Dear customer, tell Steward Bank to be ethical,” “Workers’ rights are human rights” and “Dear customers, tell the bank to be a good Steward.”

In the two-page petition, the workers said the decision by the bank to terminate their employment and fail to compensate them was in sharp contrast with the institution’s values of “Ubuntu, excellence, integrity, professionalism and honesty.”

“We, the affected workers hereby petition the customers of Steward Bank and the public at large to appeal to Steward Bank for it to amicably resolve issues with its workers who have been thrown into the cold without any compensation,” read the petition.

The workers said the bank must in line with the requirements of the labour laws as amended last year and “compensate the affected workers fairly.”

They said they had also been surprised by the banks’ decision to go on a massive recruitment exercise hardly a year after their dismissal.

“Their decision to throw workers onto the streets surprised us, not many banks did that,” he said.

Some customers who walked into the Avondale branch took time to talk to some of the workers to understand their grievances.

Efforts to get a comment from the bank were fruitless.- The Source

Econet and Steward Bank: Corporate bullying with a huge stink