Calling for sanctions on Zimbabwe is un-MDC says Mwonzora 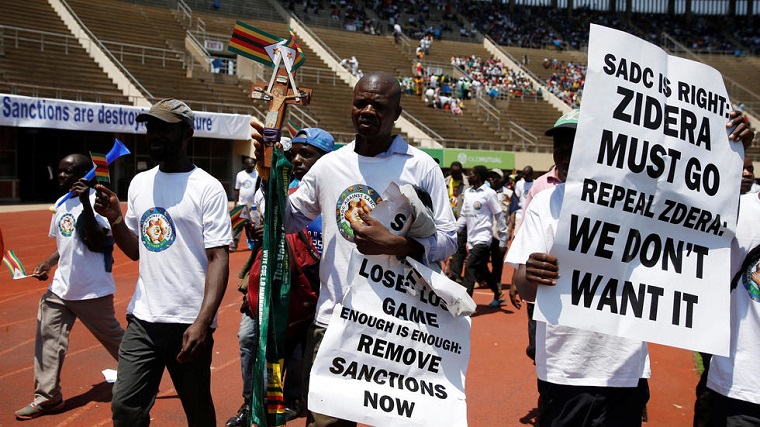 Movement for Democratic Change-Tsvangirai leader Douglas Mwonzora has told Parliament that calling for sanctions is un-MDC because the opposition party has called for the lifting of sanctions on Zimbabwe since 2008 when it signed the Global Political Agreement with the Zimbabwe African National Union-Patriotic Front.

Mwonzora said the sanctions had not achieved their objective as the rich were getting richer while the poor were getting poorer.

“In our respectful view, the people targeted by the sanctions are not the sufferers of the sanctions.  The fact of the matter is that these sanctions have made the rich richer and the poor poorer.  Therefore, they are not saving their purpose.  Massive unemployment has resulted in Zimbabwe – actually 49% of the Zimbabweans live below the poverty datum line.  That is unacceptable,” Mwonzora said.

“The Zimbabwean economy is now smaller than it was in 2002.  As a result of sanctions, criminals take advantage.  Every situation breeds its own antithesis.  So, where there is sanction, the antithesis is sanction busting…..

“Now this current Government, we have a lot of top Government people who, under the guise of busting sanctions, are now smuggling gold through regular ports of entry.  Those transactions cannot be traced because they are covered by secrecy anyway.  So, sanctions breed corruption; make the rich richer and the poor poorer.  So they must go……

“As MDC, we think these sanctions have outlived their usefulness and they must go.  Also because of the sanctions, there is a ready excuse for under performance.  Sometimes, people fail to deliver and just blame sanctions.  Sometimes, people fail to be fair in the rural areas – you give food to this one and you do not give food to that one and when people ask you why we are being deprived, the ready excuse is sanctions.  So that excuse must go….

“If you go to Highfield today, you may not find a house under construction but if you go to Borrowdale, Glenlorne, Mount Pleasant, you will see skyscrapers being erected every day.  The rich are getting richer; the poor are getting poorer and we need to redress that.”