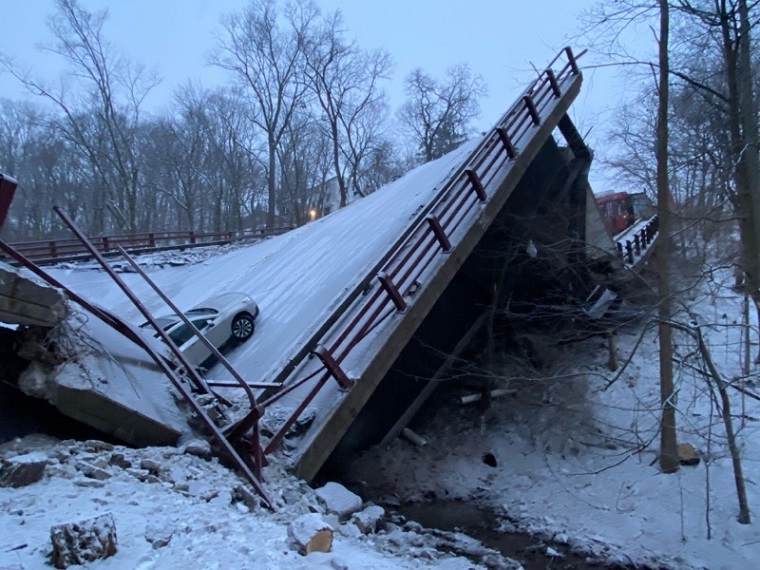 The collapse of Pittsburgh’s Fern Hollow Bridge on Friday has thrust the country’s aging bridge infrastructure into the spotlight once again.

According to a new report, released Monday, 36% of the country’s bridges need to be repaired or replaced entirely.

Pennsylvania has the second-highest number of bridges rated in poor condition. The now-collapsed, 50-year-old bridge, which left 10 people injured, has been on the list since 2012.

In an ironic turn of events, the bridge gave way only hours before President Biden was scheduled to visit to promote his US$1 trillion infrastructure bill, which passed in November 2021.

There are plans to allocate US$27 billion from it to rebuild crumbling roads and bridges across the nation, US$1.6 billion of which will go to Pennsylvania.

It remains unclear exactly which bridges will be on the receiving end of these funds, but according to the report, it will take closer to US$260 billion to fix every single bridge that needs repairing in the US.

The report was compiled by the American Road & Transportation Builders Association (ARTBA), a trade association advocating for more investment in transportation infrastructure.

The ARTBA estimated that a whopping 224 000 bridges in the US need to be repaired: over 43 000 are classified as “structurally deficient” or in “poor condition,” and 78 800 need to be entirely replaced.

The sheer magnitude of those numbers can be hard to put into perspective, but if you were to place all bridges end-to-end, the report suggests it would be long enough to crisscross the country from Los Angeles to Portland, Maine—and back again.

Many of the bridges listed in the report have needed maintenance for years. “About 90% of the bridges that are classified as ‘poor condition’ were [also] structurally deficient last year,” says Alison Black, the ARTBA’s chief economist and author of the report.

Compared to 2020, over 1 400 bridges nationwide have been repaired and taken off the list, while a dozen have been added, including the Chesapeake Bay Bridge-Tunnel on Route 13 in Northampton, Virginia; the US 60/62 bridge over the Mississippi River connecting Illinois and Missouri; and multiple highway bridges on I-680 in Contra Costa, California. At this pace, the report says it would take about 30 years to fix all the bridges, but the new federal investment could help.

Over the next five years, the US Department of Transportation and the Federal Highway Administration will distribute US$27 billion across all 50 states. California tops the list with US$4.2 billion; New York with US$1.9 billion, and Pennsylvania with US$1.6 billion (followed by Illinois, Massachusetts, New Jersey, and Louisiana).

There are two other pots of money that states can tap into to fix their bridges. The infrastructure bill also authorized US$12.5 billion for competitive grants through the Bridge Investment Program.

“That underscores the importance of directing some money specifically towards bridges,” says Black. (This is a discretionary program, so the DOT will decide where to allocate the funds.)

On top of that, states can choose to use some money from the Federal Highway Program toward bridge repairs. Historically, most federal money has gone toward the national highway system and major interstates.

“The idea is that you want that federal money targeted towards roads that are important to the national economy,” says Black. But in this case, Black says the government is giving states some flexibility so they can use some of that money to fix local bridges. The Federal Highway Program has gone up from US$46.4 billion last year to US$57.5 billion in 2022. “It’s one of the biggest increases we’ve ever seen,” says Black.

How states dole out the infrastructure funds is up to each state’s Department of Transportation. In Pennsylvania, over 3 300 bridges are rated in poor condition, out of about 25 400 total bridges across the state. Judging from PennDOT’s log of planned works for bridges and roads, about a dozen bridge repairs and replacements are currently underway. (There’s a dozen more in the pipeline over the next four years and about 50 more over the next 12 years.)

The good news is, the number of bridges that need to be fixed or replaced, including those that are structurally deficient, has been dropping steadily over the past few years—just not fast enough to prevent yet another bridge from collapsing.- Fast Company