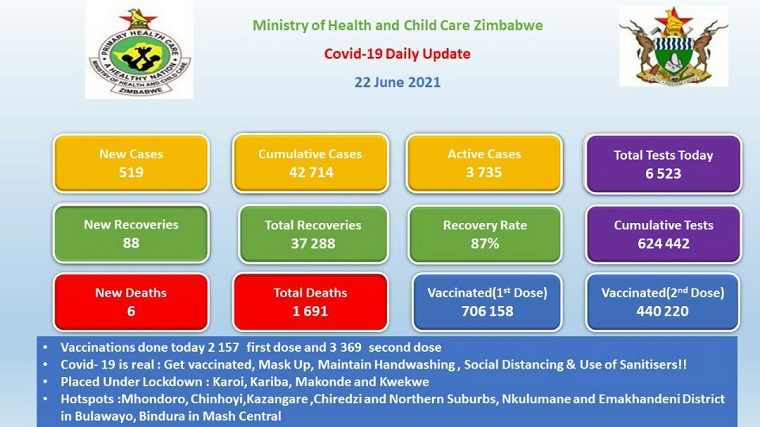 Zimbabwe today said it will launch a security blitz to enforce measures introduced by the government to curb the spread of the coronavirus pandemic as cases today soared to 519 in 24 hours, with 228 of them in Mashonaland West where at least three districts and six hotspots are under localized lockdowns.

The government has introduced localized lockdowns and identified hotspots across the country. It has introduced dusk-to-dawn curfews in some of the areas under lockdown and had reduced seating capacity of public transport to allow for social distancing, among other measures.

The Midlands was the second worst hit today with 65 new cases, but it also recorded 58 of the 88 recoveries and had four of the six deaths recorded.

Zimbabwe has postponed the opening of schools by 14 days in view of the upsurge in the number of cases. Schools were supposed to reopen on Monday, 28 June.

It also announced that it will be getting 2.5 million doses of vaccine by the end of this month.

Vaccination has slowed to a tickle with 2 157 getting their first jab today and 3 369 their second.