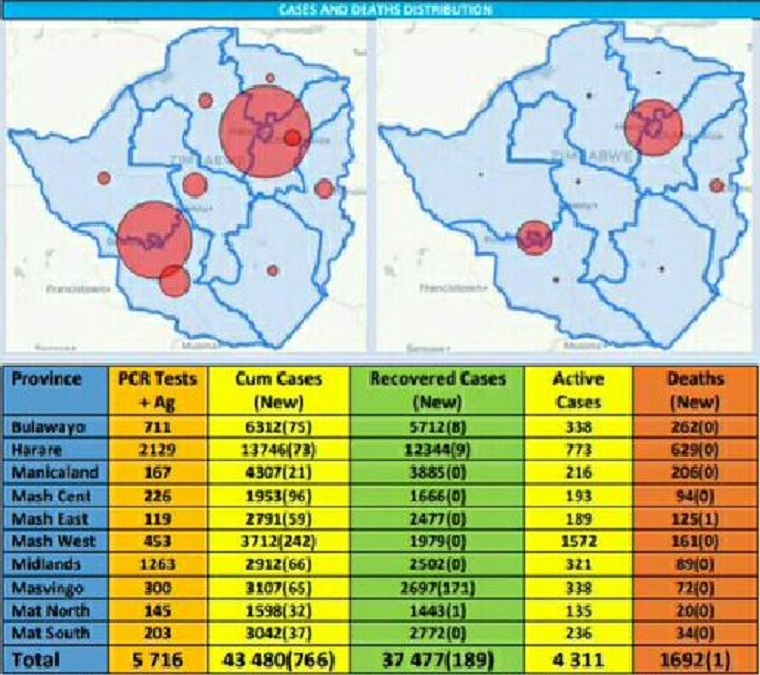 The number of new coronavirus cases in Zimbabwe today soared to 766 with 242 of them in Mashonaland West but there was only one death, ironically in Mashonaland East which has the second lowest number of cases in the country.

Four new areas in Mashonaland West- Chibara, Doro, Nyangoma and Kazangare- were identified as hotpots while Marondera in Mashonaland East was added to the list.

A total of 189 people recovered today, 171 of them from Masvingo, but the number of active cases in Masvingo only dropped to 338 because there were 65 new cases.

Mashonaland Central had 96 new cases today but is still at 193 while Mashonaland East had 59 new cases and one death and now has 189 cases.

Matebeleland North has the lowest number of cases at 135. It had 32 new cases today.

The vaccination programme picked up today with more than 20 000 people getting the jab, 8 898 getting the first and 11 573 the second.

Zimbabwe is expected to get an additional 2.5 million vaccine doses within the next week.