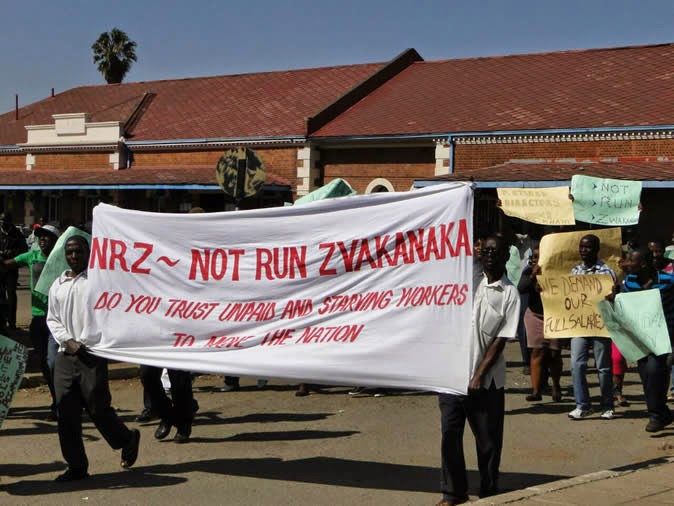 Zimbabwe’s main labour federation has approached the International Labour Organisation (ILO) to intervene in the pay dispute between the National Railways of Zimbabwe (NRZ) and its 6 000 workers who are on strike over non-payment of salaries for 15 months.

The Zimbabwe Congress of Trade Unions (ZCTU) wants the ILO to mediate in talks with government, the 100 percent shareholder in the troubled rail monopoly, to pay the salaries.

NRZ workers, who went on strike on March 29, say NRZ owes a total $87.5 million in unpaid salaries from January 2015 to March this year. Workers have rejected an offer by NRZ to pay part of their salaries for January this year, prompting the company to approach government to declare the action illegal.

In a letter to the ILO last week, ZCTU told the United Nations agency that the crisis at NRZ was caused by “misplaced priorities (and) both government and management incompetence to turn around the parastatal”.

“The dispute is of nonpayment of wages for the period January 2015 to March 2016, a period of 15 months.  The company owes about $87.5 million in salary arrears. On 29 March 2016 the workers engaged on a strike to force the employer to pay their salaries which are overdue,” said ZCTU secretary-general Japhet Moyo in the letter.

“This failure to pay salaries has also affected the trade unions in terms of subscriptions not remitted to the unions. The unions are now incapacitated to conduct their activities. Following the strike, management have invoked the law by approaching the Minister of Public Service, Labour and Social Welfare to issue a show cause order whose effect is to terminate a legitimate strike and may have consequences of dismissing employees who have a legitimate cause.”

He requested the ILO to approach government and demand full payment of salaries to NRZ workers.

He said the ILO must also demand that workers do not become victimised for undertaking the industrial action.

“The government must not invoke its law to deal with the striking workers, which law is inconsistent with the Constitution of Zimbabwe and principles of freedom of association and protection of the rights to organise, to which it is a party. The government must also ensure trade union subscriptions are remitted to allow these organisations to function properly,” Moyo said.- The Source