US economist says Zimbabwe crackdown on black market is paying... 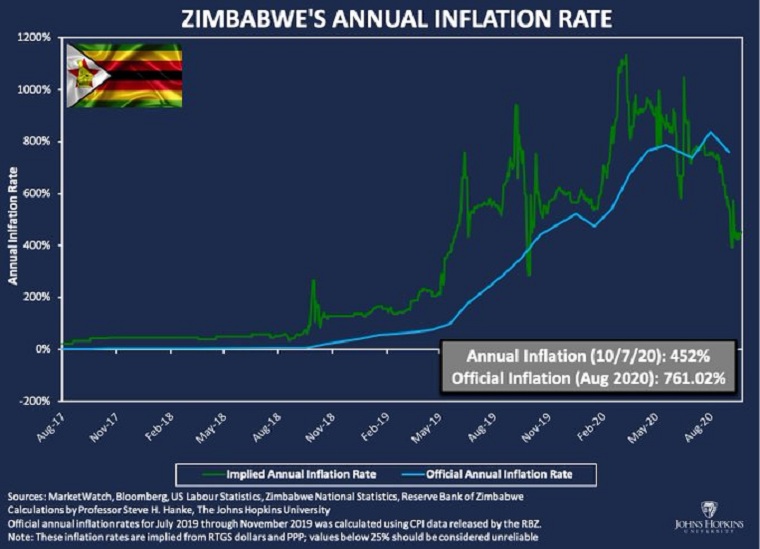 United States Economist Steve Hanke, one of the staunchest critics of the Zimbabwe administration, says the government crackdown on underground currency trading is paying off.

He says inflation has dropped to 452%, more than 300 percentage points lower than the official rate.

“The #ZANU-PF’s crackdown on underground currency trading has caused #Inflation in #Zimbabwe to drop significantly. Using high frequency data and sound science, I measure Zim’s inflation to be 452%/yr, almost 300 percentage points lower than the official rate,” he tweeted today.

Inflation stood a 761% in August, the latest figure available. Inflation for September should be out in a few days.

Commenting on Hanke’s tweet, a number of people said credit must go to Zimbabwe Finance Minister Mthuli Ncube because he is doing a sterling job to turn around the country’s economy.

One, however, said at 452% inflation is still too high.

Government cracked down on mobile money platforms which it said were being used to fuel the black market. It reduced drastically the amount one can transact per day and said individuals should have only one mobile money account.

Ecocash, the country’s largest mobile money platform was hardest hit and is still reeling from the crackdown which has affected the release of the financial results for its parent companies, Cassava Smartech and Econet.

Ncube has said inflation could drop to 50 percent by the end of the year and this now seems possible if the government goes ahead to crack down on businesses still using the black market rate to price their goods and services.

The confederation of Zimbabwe Retailers today urged businesses to comply with the regulations on pricing goods in both US and Zimbabwe dollars at the ruling market rate.

The Zimbabwe dollar has been appreciating against the US dollar over the past six foreign exchange auctions and was pegged at $81.35 yesterday.

The market is also now meeting all qualifying bids in full and has disbursed US$291.1 million since the auction started on 23 June.

To receive Insider headlines just click on the link below: