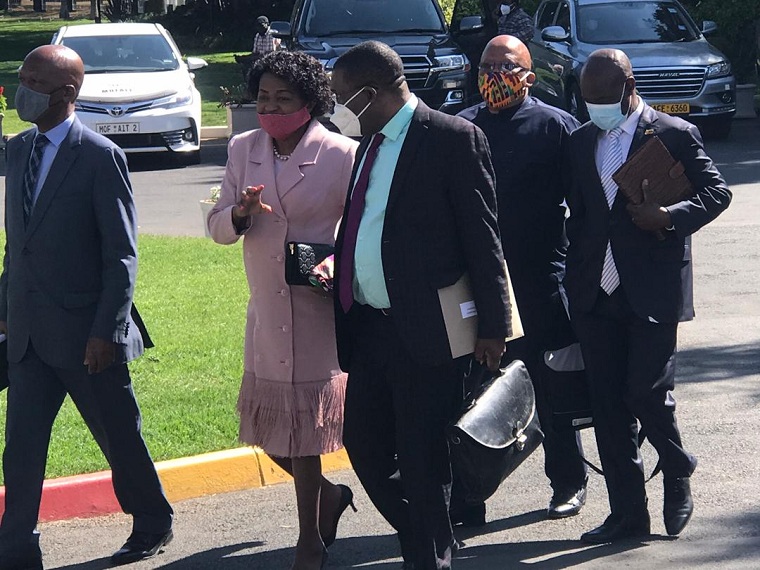 Last week, Ramaphosa, in his capacity as chairperson of the African Union, appointed former Cabinet Minister Sydney Mufamadi and former Speaker of Parliament Baleka Mbete as his special envoys to Zimbabwe following reports of ‘difficulties’ the country was experiencing.

Speaking to media after a lengthy meeting at State House, team leader Mufamadi said the envoys were on a fact-finding mission.

He however could not give details on the outcome of the meeting, preferring to first brief the principal, President Ramaphosa.

“We had a meeting with his counterpart. In other words we were listening to the reading of the situation and what is being done with the intentions to do extra things.

“I know you will not ask us to report to our President through the media, we will be reporting to the President who will then interact with the public in part through you good self , in due course,” said Mufamadi.

The deployment of envoys follow an intensified smear campaign against Zimbabwe on social media under hash tags such as #ZimbabweanLivesMatter, alleging human rights abuses happening in the country.

Zimbabwe has however dismissed claims of human rights abuses by opposition political activists saying the reports were part of a coordinated campaign to effect regime change in the country.

The envoys, however, did not meet the main opposition Movement for Democratic Change which said it was kept waiting and could only assume that the envoys did not meet the MDC delegation because of demands from the Zimbabwe African National Union-Patriotic Front.

Party spokesperson Fadzayi Mahere said that the MDC Alliance was formally requested to be available for a meeting today.

“A delegation remained on standby from 10am this morning only to be advised at the end of the day that the special envoys would be returning to South Africa without meeting the MDC Alliance delegation in order to brief President Ramaphosa on the outcomes of their meeting with Mr Mnangagwa,” Mahere said in a statement.

“We can only assume that the failure to meet the MDC Alliance delegation was as a result of demands made by the ZANU-PF delegation.

“We reiterate that Zimbabwe is in a state of crisis that has been characterized by a de facto state of emergency a crackdown on citizens, abductions, arbitrary arrests of government critics and the political persecution of journalists. The Govemment in Harare is incapable of resolving these challenges because it lacks legitimacy. We are of the firm vim that any solution to the ongoing socio-economic challenges lies in resolving the political crisis and answering the outstanding legitimacy question.

“It is clear that Mr Mnanangagwa is not ready to resolve the national crisis through genuine dialogue. However, the deteriorating plight of the Zimbabwean people means that a political settlement is more urgent than before. We will continue to engage Mr Mnangagwa to engage in sincere dialogue until national crisis is resolved.”-New Ziana/Own