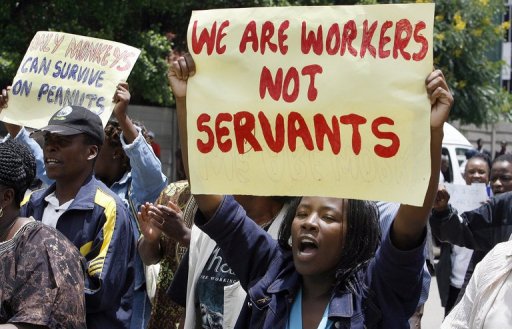 Zimbabwe’s plans to sharply cut its bloated public sector wage bill will be an uphill task given the political role played by government expenditure, a local think tank has said.

According to official Treasury statistics, civil service employment figures, minus army establishment, registered a 36 percent jump from 203 000 upon dollarization in 2009 to 276 000 in 2014.

Zimbabwe has committed to reducing the wage bill in terms of its own set targets under a reform plan it has pursed in co-operation with the International Monetary Fund.

However, a paper on the country’s wage structure and labour costs by a local think tank Labour and Economics Development Research Institute of Zimbabwe (LEDRIZ) indicates that reducing the public sector wage bill will be one of the most difficult austerity measures for the government to undertake.

“It has been argued that expenditure on public sector employment plays an important political role. It is a valuable source of patronage to buy the support of vital political constituencies,” the paper reads.

“It is noteworthy that a number of senior civil servants have access to hidden allowance (petrol) and in-kind benefits (vehicles) on top of their regular pay, drawn from other budget line items.”

LEDRIZ noted that domestic and foreign travel is used by government employees as an additional allowance to subsidize their welfare.

Zimbabwe’s economy, which registered a significant rebound after the 2009 dollarization ended a decade-long recession in which as much as 50 percent of GDP was wiped off, has started to stall.

GDP growth, which averaged 9 percent between 2009 and 2011, has come off to average 3.8 percent since 2012, on the back of weak commodity prices and investor concerns over President Robert Mugabe’s populist economic policies, especially after his party won back total control of government in 2013 after four-years of sharing power with the opposition.-The Source

Why civil service and land audits were stalled