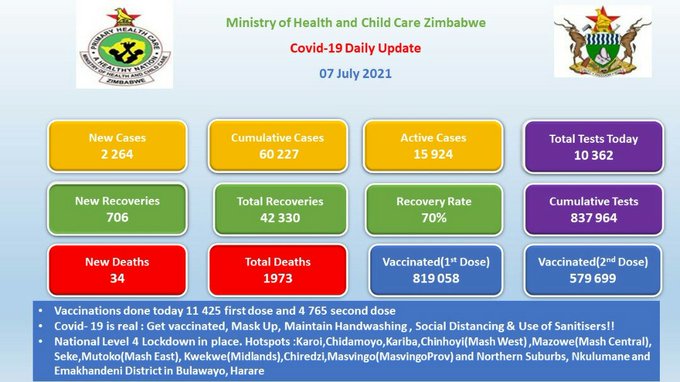 New coronavirus cases in Zimbabwe today shot up to 2 264 with Mashonaland West Continuing to have the highest number of cases followed by Harare and Matebeleland South.

Thirty-four people died with 10 from Mashonaland West. There were deaths in seven of the 10 provinces with the exceptions being Mashonaland East, Masvingo and Matebeleland North.

Some 706 people recovered today with Matebeleland South recording the highest number of recoveries at 287 but active cases only dropped marginally because it had 320 new cases.

It has the second lowest number of cases at 807. Matebeleland North has 801 while the rest of the provinces have more than a thousand cases each.

Vaccination picked up a little with 11 425 getting the first jab and 4 765 the second and final dose.

There is already a stampede by people wanting to get vaccinated.

Two million doses are expected to arrive in the country tomorrow afternoon.