Mugabe tells opposition he is not going anywhere- “you can... 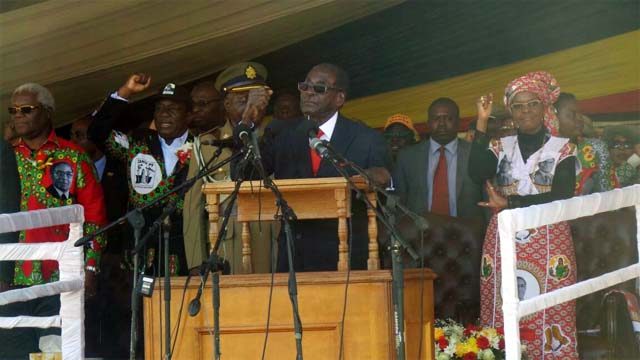 President Robert Mugabe today told opposition parties that he is not going anywhere. It is his Zimbabwe African National Union-Patriotic Front which will decide and if it says he must go, he will go.

Addressing thousands of people that joined the million-man march in solidarity with the 92-year-old president who has been at the helm of the country since 1980, first as prime minister and then as president, Mugabe was quoted by The Herald as saying:  “Tiri tese . . .if the people say go then I go. As long as I feel I can serve the people I do . .but when the times comes I go . . ..”

In response to calls from the supporters for him to stay, Mugabe said: “Ah, hakuna kwandinoenda……ko ndinoenda kupiko?  VaMugabe says no, you go hang, hang yourselves.”

Mugabe told his supporters to shun factionalism which has reportedly split the party with one group said to be loyal to his wife, Grace, and the other to Vice-President Emmerson Mnangagwa.

“There shall never be little groups to promotes so and so…those little groups are treasonous groups. They spoil the party. There is only one ZANU-PF. Why don’t you bring your criticism to the party? Why go to newspapers . . .

“The Party was never founded on other principles other than principles of unity, togetherness and harmony…not disharmony!” he said.

The million-man march was allegedly organised by the G40 faction that is allegedly behind the First Lady. Whispers say the march was originally meant to prop Grace Mugabe but this was changed after the war veterans meeting of 7 April which said there was only one-commander-in-chief, Robert Mugabe.

Mugabe also told his supporters that there should not be any discrimination in food distribution. Every Zimbabwean, including those who supported the opposition where entitled to drought relief.

“Yes, tinotsutsumwa hedu kuti kana vaguta matumbu voti denouncer futi . . .requesting imperialists to impose more sanctions on us. Anyway, that is how our opposition behaves.  It’s quite peculiar. I wonder what ideas to improve the country they have,” Mugabe said.