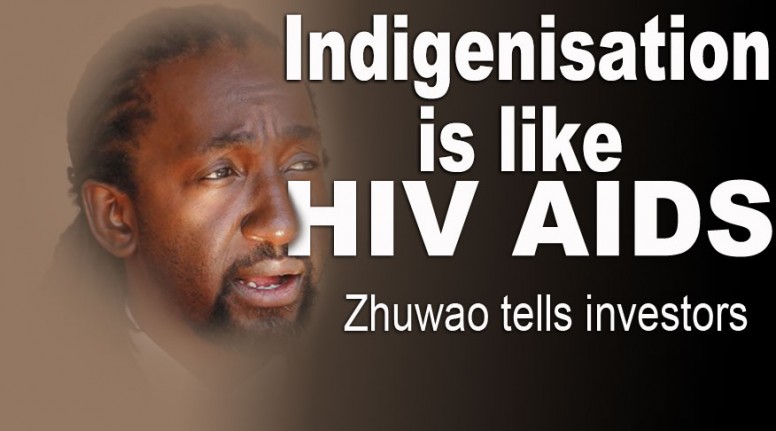 The temptation to point and laugh at Patrick Zhuwao is very hard to resist.

Youth and Economic Empowerment Minister, Zhuwao has called other ministers “liars”, written tedious, preachy articles in the state-owned press, walked out on radio interviews, threatened to shut down companies, and even bizarrely described foreign investment as “ungodly”.

These are hardly the sort of attributes one puts on their CV when applying for the job of economically empowering an entire nation.

Tuesday’s statement by President Robert Mugabe to “clarify the government position on indigenisation” was a slap in the face for Zhuwao. All his fighting rhetoric on closing down companies and taking over banks was shredded for the more pragmatic positions taken by Finance Minister Patrick Chinamasa.

So, we all pointed and laughed at Zhuwao.

However, while the President’s statement was widely welcomed, it points to deeper flaws in government’s whole approach to economic empowerment over the past decade.

Firstly, Zimbabwe’s approach to empowerment has been based on false premises; that we are swamped by a multitude of foreign investors, and that they are so eager to get into Zimbabwe we can keep them waiting while we decide what exactly it is we want to do with our empowerment laws.

The truth is foreign investors have options. Zimbabwe received just $510 million of the $5 billion worth of FDI that the region got in 2015, according to the United Nations Conference on Trade and Development.

Secondly, almost a decade after enacting the empowerment law, the government is yet to decide how exactly it wants to implement it. Policy pronouncements are made, but they are only valid until the next rally.

Thirdly, in its current form, the law leaves far too much to the interpretation of different ministers, has too many loopholes for kickbacks, and leaves room for the sort of unclear clarifications that government has had to repeatedly make.

Tuesday’s statement, for instance, has too many riddles. What, for example, does government mean by stating “local content retained in Zimbabwe” by mines should not be less than “75 percent of gross value of the exploited resources”?

We looked at Zimplats’ local spend in the last quarter of 2015. As a percentage of revenue, local spend – a rough estimate in which we include procurement and taxes – was around 76 percent. So, does this mean Zimplats now complies, and can now, finally, be left alone to get on with business?