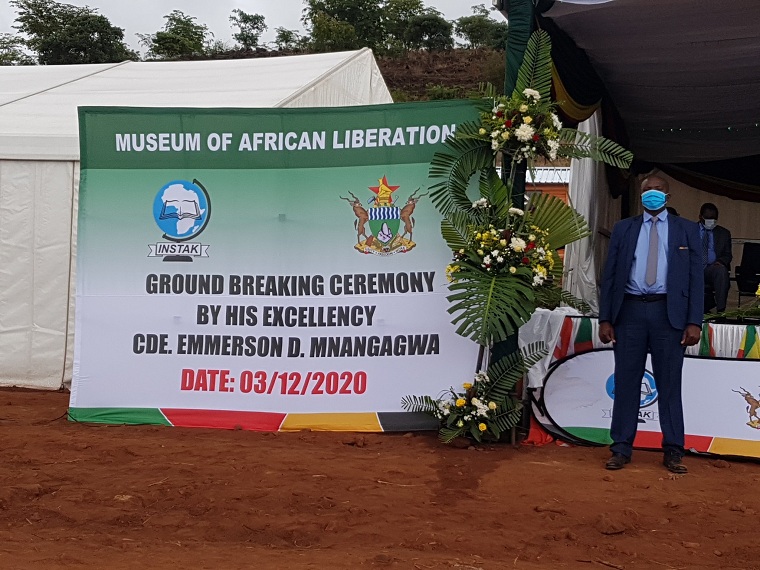 Zimbabwe President Emmerson Mnangagwa today broke the ground for the construction of the Museum of African Liberation in Harare which will document the liberation struggle of the continent.

The site will host four facilities namely: the monument of African Liberation, the Museum, premises for conferencing and an amusement centre.

Speaking at the occasion, Mnangagwa said construction of the museum would go a long way towards immortalising the sacrifices made by Africa’s founding fathers and liberation veterans.

“Zimbabwe dedicates this piece of land to the preservation of the rich liberation war heritage of our great African continent.

“The construction of this museum is not to trap us in our past, but meant to ensure that we use our history to learn from the past and chart a better future for the next generation.

“Through this continental project, let us put to rest the one-sided euro- centric narratives which have been perpetuated in the public space for too long,” he said.

Mnangagwa said Zimbabwe was honoured to host the museum as well as coordinating the construction of a ‘unique repository’ of African liberation heritage.

“The construction of the Museum of African Liberation is an important infrastructural project which will go a long way towards immortalising and preserving the resistance, acts of patriotism and sacrifices made by our founding fathers and liberation veterans. Their determination to liberate Africa from the yokes of colonial bondage must embolden present and future generations to achieve greater exploits,” he said.

“Learning from our history and past, the time has come for us to deliberately and more consciously defend our interests as the people of Africa. Let us never give in to the cunning machinations of neo-colonial forces in whatever guise.

“To do so is a betrayal to the great founding fathers, men and women who paid the ultimate sacrifice for the unity, freedom, democracy and development we are enjoying today,” he said.

Mnangagwa said the construction of the Museum of African Liberation goes beyond a physical structure, but entails a revisit to veterans and communities who endured the brunt of the armed struggle.

“Building from the Africa Fact Book, this project will see the documentation of African Liberation stories from across the entire continent; told by actors and participants. The pendulum has surely shifted and the African story will now be told, first and foremost, from the vantage point of Africa and by us, Africans,” he said.

At the event, artefacts for Zimbabwe’s liberation war veterans were presented to the President by their family members for them to be kept in the museum as souvenirs.

Artefacts for other liberation icons from the African continent are expected to be deposited with the museum soon.-New Ziana