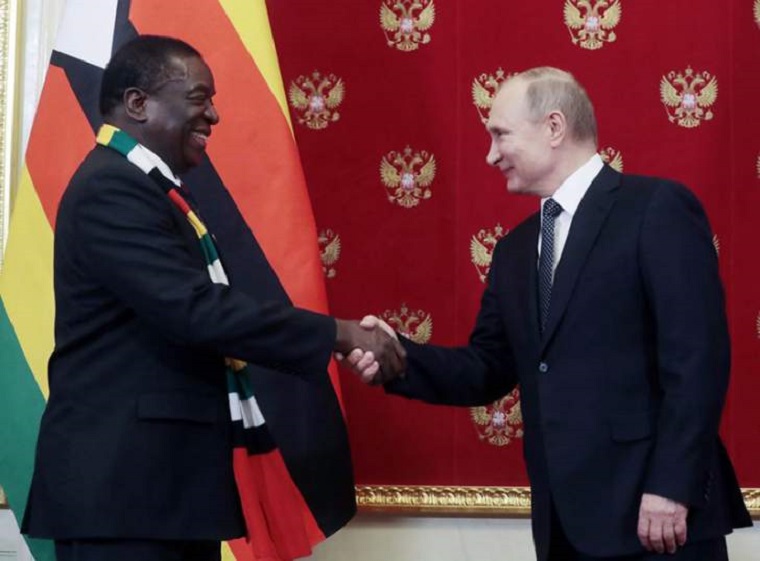 Mnangagwa’s administration may announce plans as early as this week for government departments in Zimbabwe — under US sanctions for economic mismanagement and human rights violations for the past two decades — to show “high preference” for the Zimbabwe dollar in the payment of services, according to Persistence Gwanyanya, a Harare-based economist and member of the Reserve Bank of Zimbabwe’s Monetary Policy Committee.

“We are going to see a significant shift by government toward our own currency,” Gwanyanya said Sunday in an interview by phone. “We are drawing lessons from Russia, one of those is that heavy dependence on US dollars is not good. We want to try and reflect some of these geo-political issues in our local economy.”

Russia’s attempts to bolster the rouble by demanding payment for gas and oil in its own currency along with strict capital controls has sheltered the rouble. Putin resorted to the measure because of heavy sanctions for his war in Ukraine.

But Zimbabwe’s attempts to shake off its dependence on the US dollar may be tougher. Greenbacks are used to pay for almost everything from food to fuel, medicines and road tolls. Workers including teachers and bank employees have since the start of this year demanded salaries in US dollars to meet living costs pegged in foreign currency.

Zimbabwe had a trade deficit of US$1.2 billion last year, according to data compiled by Bloomberg. That compares with a $203 billion surplus for Russia in the same period

Even Mnangagwa’s government has previously come under criticism for undermining its own currency in favour of the US dollar, paying its workers their bonuses in foreign currency last year.

Under the new measures, payment using local currency will increase for services including obtaining passports, paying import duties and taxes. Agreement has already been reached with Treasury, Gwanyanya said. The local currency officially trades at 159.34 per US dollar and has lost a third of its value this year. In the parallel market it sells at 400 per US dollar.

“The Western powers have met their match in Putin, who is demanding payment for gas and oil in roubles,” Mnangagwa said last month. “So now, we are saying to our industrialists, all these big companies, any investor that comes in here must buy using the Zimbabwean dollar.”

The US sanctions known as the Zimbabwe Democracy and Economic Recovery Act bars international lenders from providing Zimbabwe with credit lines. Saddled with US$13 billion in overseas obligations, Zimbabwe can’t borrow without clearing its arrears first.

The rules also impose heavy penalties on foreign companies which conduct transactions with Zimbabwean firms under sanctions. Zimbabwe’s central bank estimates that at least 100 correspondent banking relationships were lost by the country due to the impact of restrictions.

The southern African nation has previously tried to bolster its currency after dropping the use of the US dollar in favor of the Zimbabwe dollar in 2019. But the local currency has struggled to find acceptance, weighed by volatility and accelerating inflation.

“What’s different from other announcements in the past is that we had not seen the Executive weighing in,” Gwanyanya said. “We have buy-in from the Executive on all the issues.”

Mnangagwa in an opinion article published on Sunday in state-media said the looming measures will “increase confidence in the local unit.”- Bloomberg