MDC-T warns of a return to the Gono days of... 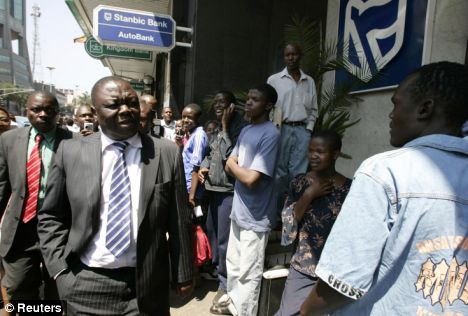 The Morgan Tsvangirai-led faction of the Movement for Democratic Change has warned that Zimbabwe could face a serious cash crisis which could result in shortages of goods and queues for fuel.

In a statement today the party said the crisis has serious implications as the business community is increasing discovering that they cannot pay suppliers when they have ample funds in their banks.

“If this continues, shortages of goods will start appearing and queues might develop for fuel,” it said.

“The reasons are technical and are linked to a sharp decline in confidence in Zimbabwe and fears of an impending collapse. The reasons are linked to the deteriorating political situation and the almost complete failure of the government to get to grips with the infighting in ZANU-PF and rampant corruption in all State controlled spheres of activity.”

The MDC-T said the beleaguered and faction-ridden ZANU-PF regime had no solutions to the myriad problems that the country is currently facing.

“Only a legitimate and democratically elected government will be in a position to extricate millions of Zimbabweans from the life penury and deprivation that they are presently experiencing,” it said.

Zimbabwe is holding its elections in two years. ZANU-PF has already said President Robert Mugabe, who will be 94, will be its candidate.happy as First Lady

His wife, Grace, who played a key role in getting rid of then leading successor to Mugabe, former Vice-President Joice Mujuru, seems all-out to kick out the current most promising successor Emmerson Mnangagwa, though Mnangagwa insists he has no presidential ambitions.

Grace too, has publicly stated that she is happy as First Lady and has no presidential ambitions but has said her husband should remain president even if she has to wheel him to the office.