MDC-T calls on government to implement new constitution to empower...

The Morgan Tsvangirai faction of the Movement for Democratic Change has called on the government to implement the new constitution which was approved three years ago to empower communities so that they can benefit from their natural resources.

The party could also benefit from devolution as it controls the major cities. The government has over the years usurped this power by dissolving MDC-T run councils and appointing commissions run by Zimbabwe African National Union-Patriotic Front but the latest such action involving the Gweru City Council was ruled unconstitutional.

The MDC-T said refusal by the government to implement this policy has seen local communities such as those in Chiadzwa, Hwange National Park and Binga failing to benefit from natural resources that are being exploited in their areas.

“It is tragic that alluvial diamonds worth billions of United States dollars have been extracted from the Marange diamond fields over the past seven or eight years but the local communities have nothing to show for all this wealth that has been taken away from their homeland,” the party said in a statement today. 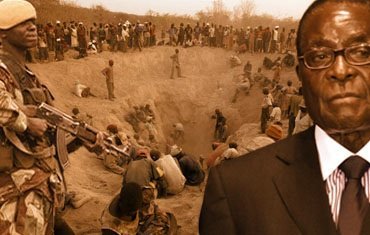 A scene at the Marange diamond fields- Pic Nehanda radio

“Thousands of villagers in Marange are still living in abject poverty despite the fact that diamonds were being mined in their own backyard. No clinics, hospitals and other social amenities were constructed by the diamond companies that have been operating in the Marange communal lands. As if this is not enough exploitation, the people of Marange are also bitterly complaining that the Odzi River has been polluted through the dumping of toxic waste by these diamond mining companies. The million dollar question, therefore, is, ‘who has actually benefitted from the diamond mining in Marange?’

“Local communities adjacent to the Hwange National Park as well as the Victoria Falls in Matebeleland North province have hardly benefitted from the natural resources in their localities. The same predicament is facing local people in Binga communal lands in the same province.

“Poverty and destitution are the order of day for local communities living adjacent to the Matusadonha National Park in the Mola communal lands near Lake Kariba in Mashonaland West province. Thus, the MDC calls upon the ZANU-PF government to urgently enact an appropriate Provincial Councils Act in terms of Section 268 of the Constitution as well as to align both the Urban Councils Act and the Rural District Councils Act with the provisions of the Constitution. For instance, there is absolutely no good reason why metropolitan councils have still not been created in Harare and Bulawayo; almost thee (3) years after the harmonised elections that were held on July 31, 2013.”

Full statement on next page: