Masvingo now has the second highest number of coronavirus cases...

Ten days ago there was no single coronavirus case in Masvingo, Matebeleland South, Manicaland and Mashonaland Central.

But today, Masvingo has the second highest number of coronavirus cases in the country, after Harare.

The province, which shares borders with South Africa and Mozambique, and where the Shangaan can easily belong to any of the three states, now has 25 cases less than half the 59 in Harare. But most of the cases are of returning Zimbabweans.

According to the latest figures from the Ministry of Health, Zimbabwe now has 132 cases of coronavirus. A staggering 103 are active after 76 new cases were reported in the last three days.

Harare now has 46 after 35 new cases were added.

All 25 cases in Masvingo are active and so are the 16 cases In Matebeleland South which is now in third place one case behind Bulawayo but the second city only has five active cases after three new cases were added to the two remaining active cases.

At one time it had appeared that Zimbabwe was turning the curve but this has been thrown out of the window.

Zimbabwe has only four deaths but more than 356 700 people had died by last night with the United States account for just over 102 000. 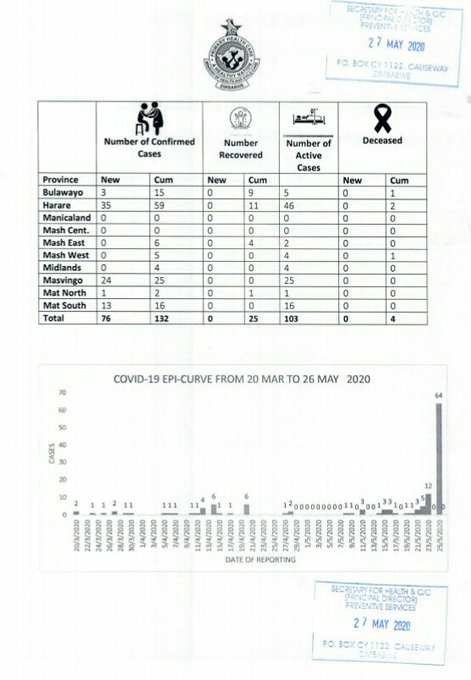