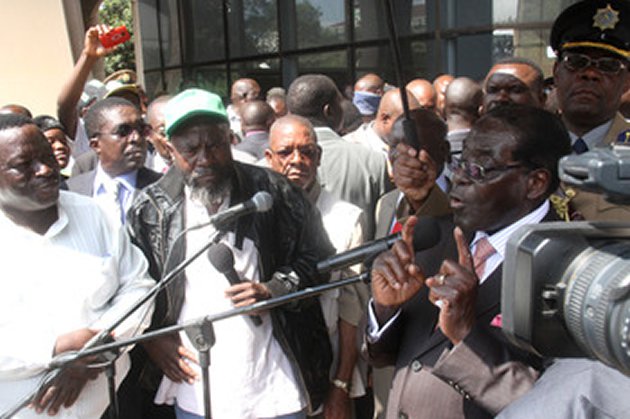 According to Newsday, they want him to go because he is fanning factionalism and tribalism.

Zimbabwe National Liberation War Veterans’ Association spokesperson Douglas Mahiya was quoted as saying:  “The war veterans are the owners of ZANU-PF. ZANU-PF cannot afford to ignore its forces in as much as ZANU and ZAPU could never have ignored ZIPRA and ZANLA.  We are the foundation of the party and the party must take what we say very seriously. The vote of no-confidence has been passed and must be executed, that is what we expect.”

But it is not only Mphoko, who is widely regarded to belong to the G40 group that supports the First Lady Grace Mugabe, that the war veterans are after. They also want political commissar Saviour Kasukuwere, Higher Education Minister Jonathan Moyo, Sarah Mahoka, Shadreck Mashayamombe, Eunice Sandi-Moyo, youth leader Kudzai Chipanga and President Robert Mugabe’s nephew Patrick Zhuwao, to go.

In short, they are saying their patron Mugabe must go if he does not fire members of the G40 that are backing his wife.

Mahiya’s sentiments are a direct confrontation with Mugabe because he is saying the same thing that war veterans' leader Christopher Mutsvangwa was suspended from the party for and later fired from the politburo and cabinet.

They are also in clear defiance of Mugabe’s message last week where he said the party was supreme. War veterans answered to politicians.

Mugabe, who lambasted Mutsvangwa for his wayward behaviour and belittling the First Lady, however, is the same speech, said if war veterans wanted him to go, he would. But he said this would have to be endorsed by congress, which only comes after the 2018 elections.

Mugabe also said he would have a no-holds barred meeting with war veterans on 7 April.

Whispers say the war veterans have the support of the security forces who were irritated by comments by the First Lady that they were part of a plot to kill her younger son, Chatunga.

Mugabe has relied on war veterans to win the last three elections. The fall-out could mark the beginning of his end, though he still has two more years in office.

The question is, is he still in control of the war veterans? Can he outmanoeuvre them as he has done his opponents over the past 40 years?

Mugabe says he will step down if war veterans say so but…….

Even sellouts are war veterans- Chinotimba