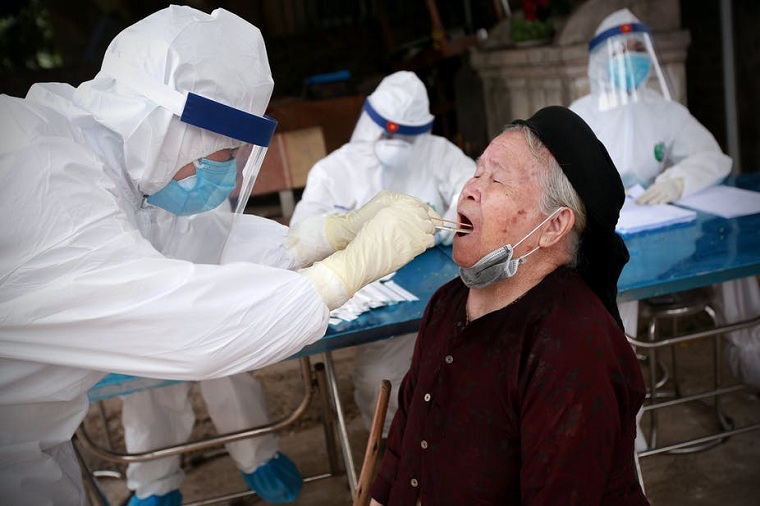 With a population of 97 million, Vietnam has managed to keep its cases to just 329. Strategies such as rapid testing and aggressive contact tracing have kept the infection rate to a minimum.  While the healthcare systems of some wealthier countries have come close to collapsing under the strain of COVID-19, Vietnam was quick to respond and remains in control. Could this swift, effective response act as a viable model to other lower-income countries?

With a population of over 97 million, Vietnam has experience in responding to outbreaks of other infectious diseases including SARS, MERS, measles and dengue.

Gavi and partners have also worked for years to improve the country’s health system so it can meet the challenge of outbreaks like this one.

In the case of the novel coronavirus, Vietnam relied on four relatively cost-effective solutions to combat the virus, including strategic testing, contact tracing through apps and effective public communication campaigns. As well as these, it implemented a national lockdown between 1st and 22nd April.

When the first reports of COVID-19 infections came out of China, Vietnam acted. Familiar with recent epidemics, such as SARS and H5N1, it closely monitored border areas to prevent the spread of the new virus. When COVID-19 was later detected it quarantined communities where the infection was detected.

On 11 January, after China reported the first coronavirus death, Vietnam implemented health checks at airports. All visitors had their body temperatures measured, and those with a fever, cough, chest pain or breathing difficulties were isolated for testing. Confirmed cases, fellow passengers and crew and all their contacts were quarantined for 14 days.

The country’s Health Ministry held a meeting with the WHO and the US Centers for Disease Control and Prevention (CDC) as early as 15 January, weeks before many other countries even started strategising.

These combined efforts of quick action and effective testing helped slow the spread of the virus in its earliest stages.

As the virus spread throughout the world, Vietnam enacted a mandatory 14-day quarantine for everyone arriving in the country and cancelled all foreign flights. People showing COVID-19 symptoms were closely monitored in medical facilities, and their contacts were traced.

Using the Ministry of Health’s records of infected, suspected and exposed cases of COVID-19, extensive contact tracing was possible thanks to “the rapid mobilisation of health professionals, public security personnel, the military, and civil servants”.

Perhaps unpopular in some more open countries, neighbours were encouraged to report if they knew of someone returning from a foreign country.

Contact tracing was also successfully implemented with technology. A mobile app called NCOVI was developed by Vietnam’s Ministry of Information and Communications (MIC). This lets the public update their health status daily. It also shares ‘hotspots’ of new cases and gives its user ‘best practices’ for staying healthy.

This was supported by an online reporting system, developed by the Health Ministry, to monitor suspected and confirmed cases of COVID-19. These combined efforts have ensured that new infections are reported and subsequently isolated.

Vietnam did not shy away from broadcasting the seriousness of COVID-19. It even made a pop music video that went viral. Supported by the State, this video uses a catchy song to communicate the importance of handwashing.

It is memorable, effective and has been enthusiastically shared with the rest of the world.

On 19 March, Vietnam also launched a fundraising campaign to buy medical and protective equipment for people working closely with COVID-19 patients. By 5 April, more than 2.1 million donations had been sent via a text message platform.

Both of these public campaigns successfully raised awareness about the coronavirus pandemic, suppressing its spread.

Some reports claim Vietnam only has zero COVID-19 deaths because of insufficient testing being carried out. However, this is not the case. Not only did the country buy 200 000 tests from South Korea, but it’s quickly developed its own successful test kits.

The Vietnamese COVID-19 test kit was developed by scientists within a month. It is effective, affordable and fast, diagnosing suspected COVID-19 infections in just an hour.

Using WHO-approved techniques, these test kits make it possible to isolate infected people and track down their contacts. Unlike other countries that rely on mass testing, in Vietnam, tests are only done on those likely to be infected.

These four factors are a crucial part of Vietnam’s COVID-19 success story. Time will tell if these measures continue to keep the number of people infected down, but it seems likely. Vietnam proves that sometimes less is more, even during COVID-19.

One unfortunate impact of the government’s strategy was an interruption to immunisation programmes that meant many children missed out on lifesaving vaccines. However now Gavi is working hard with the government to fill the gaps, accelerate immunisation activities and ultimately ensure that no child who missed out on vaccines because of the pandemic has to go without protection from preventable disease for the rest of their lives.- Gavi