Full debate on what Zimbabwe Public Service Minister said about... 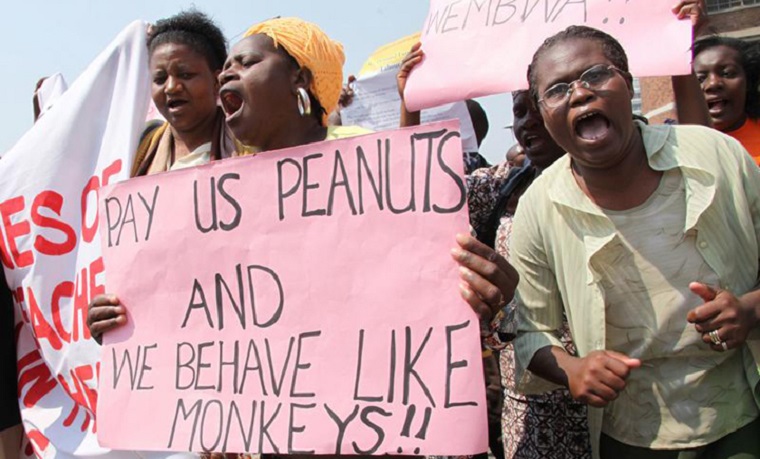 Public Service Minister Paul Mavima told Parliament yesterday that the government has no capacity to pay government workers in United States dollars but is meeting them on Monday to discuss their welfare.

Civil servants are demanding a minimum salary of US$540 and threatened to go on a two-day strike to put their point across.

Mavima said that the government was quite aware of the plight of civil servants and had so far adjusted their salaries three times this year.

HON. MUNENGAMI:  My apologies Hon. Speaker.  My question to the Hon. Minister is; what is it that Government is doing with regards to the two day strike which has just been announced by the teachers, which obviously is going to affect the students learning programme considering that other institutions like nurses, doctors and other civil servants categories have embarked on strikes and Government has listened to their grievances; but it seems as though teachers grievances are not being listened to by the Government?  Please help us by answering that question.

THE MINISTER OF PUBLIC SERVICE, LABOUR AND SOCIAL WELFARE (HON. PROF. MAVIMA): Let me thank Hon. Munengami for that important question. Hon. Speaker, there are currently intensive consultations that are going on with all representatives of civil servants. Comprehensively for the first time in actual fact, all the associations and unions have been willing to come to the table. I have already held a meeting with them and another meeting is scheduled for Monday next week so that we can discuss this issue.

Hon. Speaker, I think it would also help the House to know that there have been regular reviews of conditions of service for civil servants. This year alone, there have been at least three interventions to improve the conditions of civil servants. Government keeps the option of negotiation open all the time and it is in this spirit that we have the current consultations that are taking place and I am sure these consultations will help us to avert a job action that will be disruptive to service delivery in the public service.

HON. MUNENGAMI: I want to thank the Hon. Minister for the response. My supplementary question Hon. Minister is that the engagement which you have just started with all the civil servants leaders, will that be in good spirit when currently some of the civil service leaders have been incarcerated?

THE HON. SPEAKER: Can you clarify whether those that have been incarcerated are part of the negotiating team?