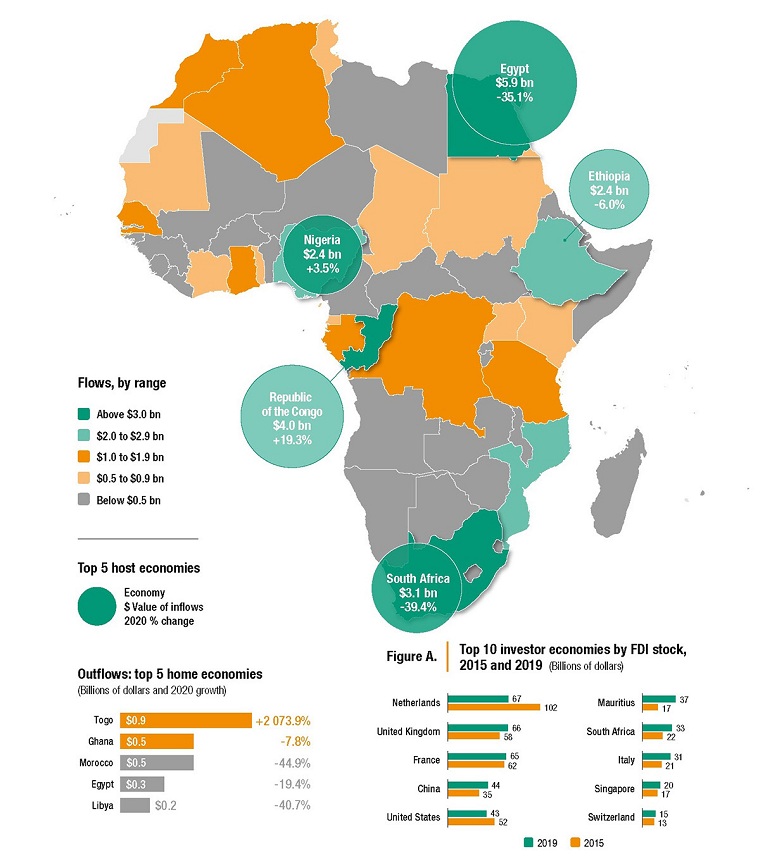 The COVID-19 pandemic had a significant impact on foreign direct investment (FDI) in Africa as flows to the continent declined by 16% in 2020 to US$40 billion, from US$47 billion in 2019.

Cascading economic and health challenges due to the pandemic combined with low prices of energy commodities weighed heavily on foreign investment to the continent, according to UNCTAD’s World Investment Report 2021, published on 21 June.

Greenfield project announcements, a measure of investor sentiment and future FDI trends, dropped by 62% to US$29 billion, from US$77 billion in 2019.

Cross-border mergers and acquisitions (M&As), fell by 45% to US$3.2 billion, from US$5.8 billion in 2019. International project finance announcements, especially relevant for large infrastructure projects, plummeted by 74% to US$32 billion.

FDI inflows to North Africa contracted by 25% to US$10 billion, down from US$14 billion in 2019, with major declines in most countries. Egypt remained the largest recipient in Africa, albeit with a significant reduction (-35%) to US$5.9 billion in 2020.

Despite the slight increase in inflows to Nigeria from US$2.3 billion in 2019 to US$2.4 billion, FDI to West Africa decreased by 18% to US$9.8 billion in 2020. Senegal was also among the few economies on the continent that received higher inflows in 2020, with a 39% increase to US$1.5 billion, due to investments in energy.

Central Africa was the only region in Africa that registered an increase in FDI in 2020, with inflows of US$9.2 billion, compared with US$8.9 billion in 2019. Increasing inflows in the Republic of Congo (by 19% to US$4.0 billion) helped prevent a decline.