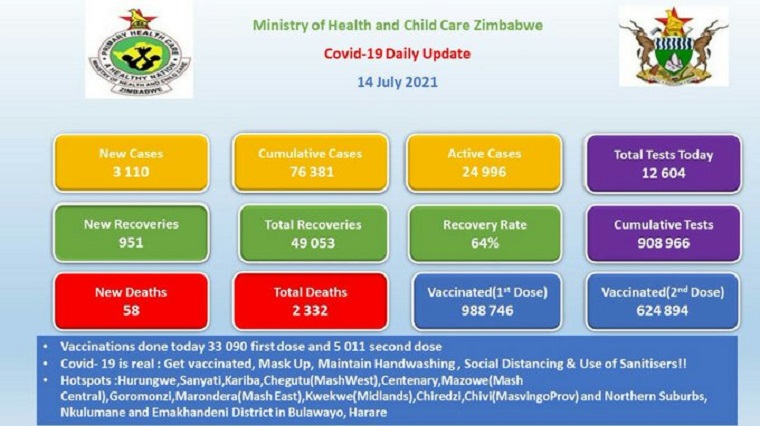 Zimbabwe yesterday recorded a whopping 3 110 new coronavirus cases and 58 deaths, 20 of them in Bulawayo alone.

The country has recorded 26 517 cases and 543 deaths so far this month which is not yet even half way through.

The recovery rate which was 77% at the beginning of the month is now down to 67%.

Harare had 422 new cases but 266 people recovered resulting in active cases going up to only 3 629.

Mashonaland East had 393 new cases but it had the highest number of recoveries at 276 so active cases only rose to 3 215.

All provinces now have more than a thousand cases, each.

The country yesterday failed to reach 40 000 vaccinations with 33 090 getting the first jab and 5 011 the second but those who have received one dose are likely to surpass one million today as they already stand at 988 746.

According to the New York Times vaccine tracker 4.2% of the country’s population has been fully vaccinated.

Zimbabwe intends to attain herd immunity by vaccinating at least 10 million people by the end of the year.