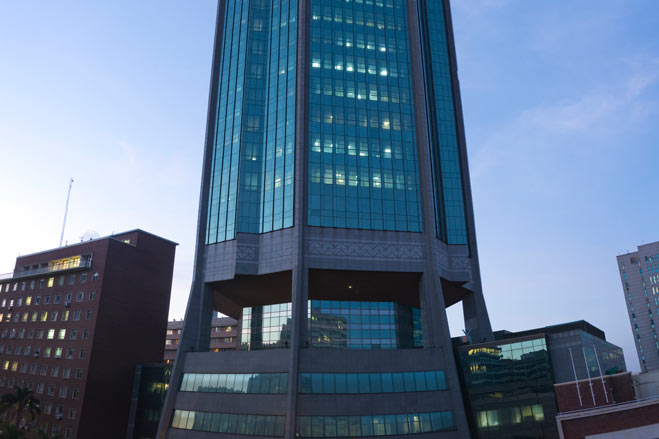 Zimbabwe’s banks made combined profits of $128 million during the full year to December 31, 2015, a 62 percent increase from $79 million after tax profits recorded the previous year, as the sector defied a sluggish economy.

All 16 banks registered profits in 2015, compared with 11 profitable banks in 2014, a report by advisory firm MMC Capital showed.

MMC Capital attributed the all-round profit showing to four banks that bounced back to profitability during the review period, as well as significant growth in profitability at POSB, Ecobank and NMB Bank despite a sustained liquidity crisis, declining disposable incomes and company closures.

“Profits were predominately posted across the board with aggregate banking sector profit after Tax (PAT), at $128 million rising from $79 million recorded in 2014,” MMC saidin its latest banking sector report.

“The rise in PAT was mainly attributed to an improvement in fortunes for banks such as Metbank, FBC, BancABC and ZB Bank, which all moved into profitability in the year under review. Other previously profitable banks such as POSB, Ecobank and NMB registered impressive growth in profits, advancing by 532 percent, 141 percent and 235 percent respectively. All sixteen banks ended the year 2015 in the black, compared to only 11 banks that were profitable in the previous year,” MMC Capital added.

The report indicated that despite the poor performance of Zimbabwe’s economy, highlighted by depressed growth in manufacturing capacity and subdued foreign direct investment, banks had begun to respond to measures laid out in the past two years to stabilise the sector.

Since 2012, several banks fell by the wayside in a wave of closures blamed on delinquency and general tepid growth. These include Royal Bank, AfrAsia Kingdom Bank, Allied Bank, Tetrad Investment Bank and Interfin Banking Corporation.

While sporadic cash shortages have returned to haunt the sector in the past year,MMC Capital said based on the 2015 financial results, there were clear signs that banks were on a recovery path.

“The FY 2015 financial results for banks give a clear testament that the banking sector, indeed, is weathering the storm,” it said.

“Two of the traditional big banks, namely Barclays and Standard Chartered, gathered less than four percent combined contribution to total sector profitability. Reputed for their cautious approach, the two banks seem to have lagged behind the other tier 1 and tier 2 banks on this front with Standard Chartered in particular suffering a 94 percent decline in PAT due to a substantial tax expense,” said MMC.

Commercial banks continued to contribute a bigger share of bank profits, accounting for 66 percent during the reporting period, from 61 percent the previous comparable period.

Building societies contributed 28 percent share of profits, from 38 percent in 2014.-The Source

Reserve Bank of Zimbabwe urges banks to innovate for survival

Reserve Bank of Zimbabwe urges banks to innovate for survival