Zimbabwe Finance Minister Mthuli Ncube is upbeat about Zimbabwe’s classification last week as a lower-middle-income country and said as the country is implementing its national development strategy phase 1, it should attain upper-middle-income status by 2030.

While some development economists have questioned the use of gross domestic product and gross national income to measure progress of countries, this is the measure being used by the most powerful financial institutions in the world- the World Bank and the International Monetary Fund.

The figures tell a very interesting story especially in view of the current debates in the country.

One of the debates is that Zimbabwe was much better as Rhodesia under Ian Smith. According to the figures, however, Zimbabwe’s GNI was US$260 when Ian Smith took over as Prime Minister in 1964. It stood at US$730 when he left in 1979.

The country fared better during the inclusive government reaching US$1 210 in 2013 but it peaked at US$1 410 in 2018, the first year of President Emmerson Mnangagwa in power. 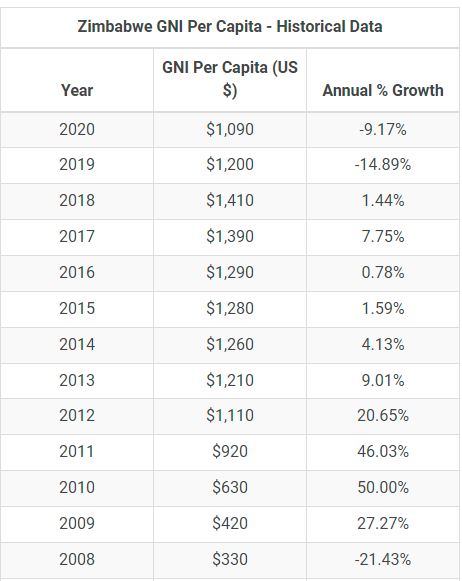