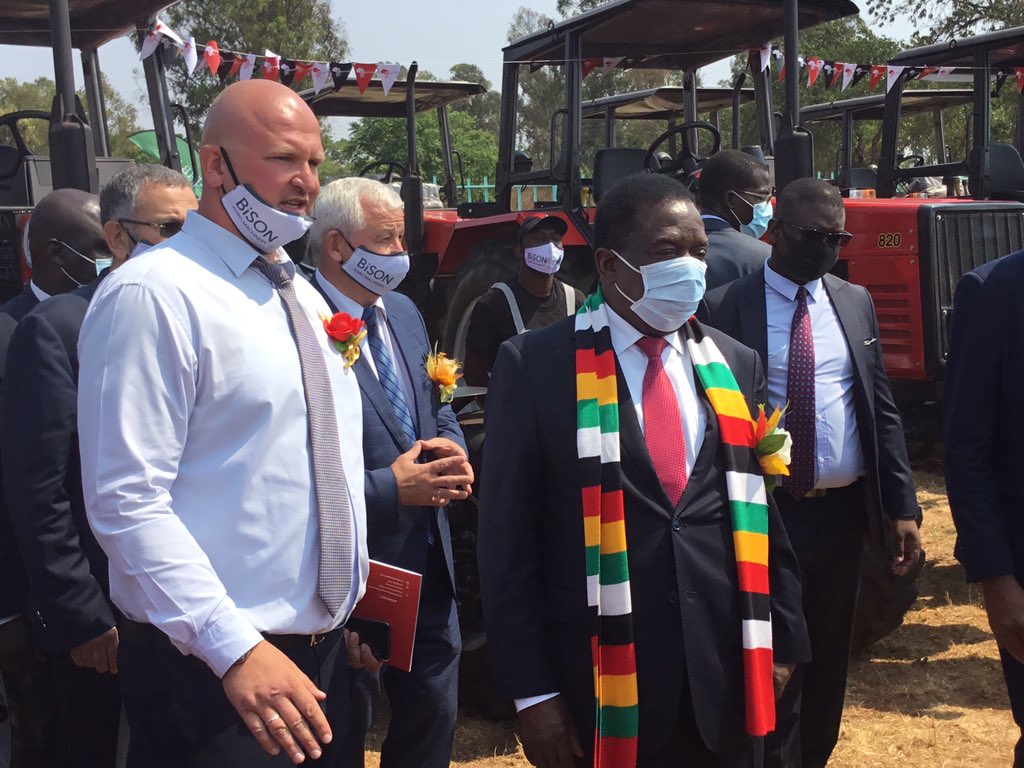 Zimbabwe and Belarus have agreed on an additional US$50 million agricultural equipment deal on top of the US$51 million farm mechanisation facility which was launched by President Emmerson Mnangagwa today.

The first batch of equipment under the US$51 million facility which was commissioned by Mnangagwa included 163 tractors, 19 combine harvesters, and low bed haulage trucks with more equipment expected before year-end.

Mnangagwa said the additional US$50 million deal, agreed to yesterday, would constitute phase two of the Belarus farm mechanisation programme.

“Zimbabwe requires more than 40 000 tractors and 600 combine harvesters with associated matching implements. It is out of this need to cover this gap and equip local farmers that my government engaged the Belarus government to establish the facility we are launching today,” he said.

“All machinery and equipment under the first phase will be delivered by year-end. Meanwhile, our two governments have agreed to proceed to phase two of the mechanisation facility which will see an additional US$50 million being availed.”

The Belarus farm mechanisation facility is a direct result of engagements made by Mnangagwa with his Belarusian counterpart President Alexander Lukashenko in January last year when he visited that country.

Mnangagwa said the equipment would be distributed through local banks.

“Beneficiaries of the Belarus mechanisation facility, like those for the John Deere facility, must be creditworthy farmers. The facility will be accessed through local banks who have been appointed as implementing agents.

“The conditions for accessing these pieces of equipment must be of necessity with suitable tenure and favorable interest. It is not one’s name that will result in access to the facility, it must be one’s productivity. Corruption of any kind will not be tolerated.”

Mnangagwa said improving agricultural output for national food security as well as for raw materials for industry remained a top priority for his government.

“This event is coming just three months following my launch of another similar mechanization facility in July this year. It is indeed a testimony of my administration’s resolve to accelerate the sustainable modernisation and mechanisation of our agriculture sector,” he said.

“The use of modern equipment together with the effective utilisation of our water bodies will undoubtedly help us to mitigate the impact of climate change. This will in turn have an enduring impact on sustainable economic recovery and growth given the centrality of agriculture in our economy.”

He said over and above Zimbabwe’s cooperation with Belarus in the agriculture sector, plans were underway to enhance cooperation in mining.

“My administration remains open to perspectives, opportunities, partnerships, and investments to revamp and grow the sector and the economy at large,” he said.

“Altogether, this brings the mechanisation thrust to US$152 million in just 12 months and this will bring into the country a cumulative 3 000 tractors which is unprecedented in the history of our country,” he said.

“The country has just over 6 000 tractors currently which we have accumulated in the past twenty years, (but) in twelve months we have managed to get 3 000 units.”-New Ziana