Mozambique national Emmanuel Sithole is attacked by men in Alexandra... 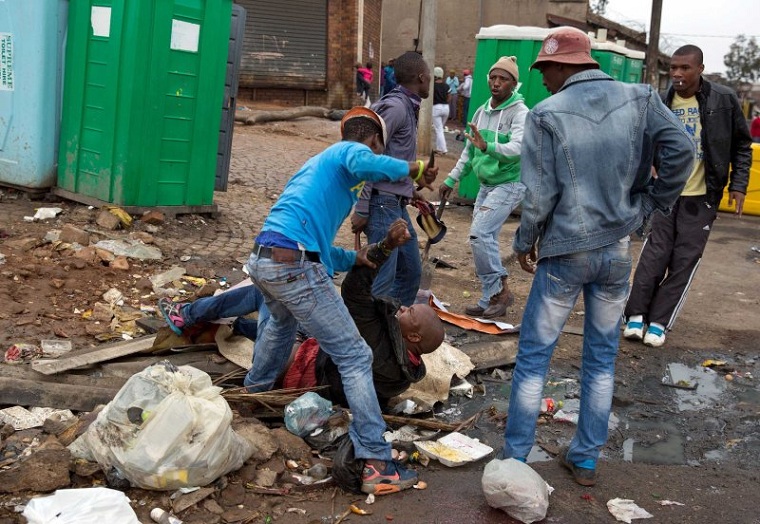 ATTENTION EDITORS – VISUAL COVERAGE OF SCENES OF DEATH AND INJURY
Mozambique national Emmanuel Sithole is attacked by men in Alexandra township during anti-immigrant violence in Johannesburg April 18, 2015. He later died of his injuries. Zimbabwean President Robert Mugabe on Saturday expressed shock and disgust at attacks on immigrants in neighbouring South Africa and said his government was working to bring back home affected Zimbabwean citizens. At least four people have been killed in a wave of anti-immigrant violence in South Africa that started two weeks ago in the port city of Durban and spread to Johannesburg. REUTERS/James Oatway/Sunday Times ATTENTION EDITORS – FOR EDITORIAL USE ONLY. NOT FOR SALE FOR MARKETING OR ADVERTISING CAMPAIGNS. THIS IMAGE HAS BEEN SUPPLIED BY A THIRD PARTY. IT IS DISTRIBUTED, EXACTLY AS RECEIVED BY REUTERS, AS A SERVICE TO CLIENTS. NO ARCHIVES. NO SALES. NO ONLINE USE. SOUTH AFRICA OUT. NO COMMERCIAL OR EDITORIAL SALES IN SOUTH AFRICA TPX IMAGES OF THE DAY