Three more people have recovered from the coronavirus in Zimbabwe bringing the total to five, the Ministry of Health reported last night.

Those who have recovered are all four from Mashonaland East who are believed to be members of one family, the Saul Sakudya family, while the other person to recover was from Matabeleland North.

The only case reported from Matebeleland North was that of a 39-year-old white male who had travelled to the United Kingdom.  This was the first case of coronavirus to be reported in the country.

The ministry said it tested 328 people yesterday, all of whom were negative.

So far 6 395 have been tested, 31 were positive, four have since died, and five have recovered.

The ministry said it had identified and collected samples from 69 people that had contact with Gogo Nguni in Mhondoro who died of the virus last week.

Two of them, a 46-year-old woman and a 66-year-old man tested positive.

The 31st patient is a 31-yer-old man from Harare who returned from the UK on 13 April.

Zimbabwe declared a five-week lockdown to curb the spread of the virus. It is supposed to end this Sunday but it is not clear whether the government will extend the lockdown again.

Observers, however, say most people will not stand another extension as they are running out of food. 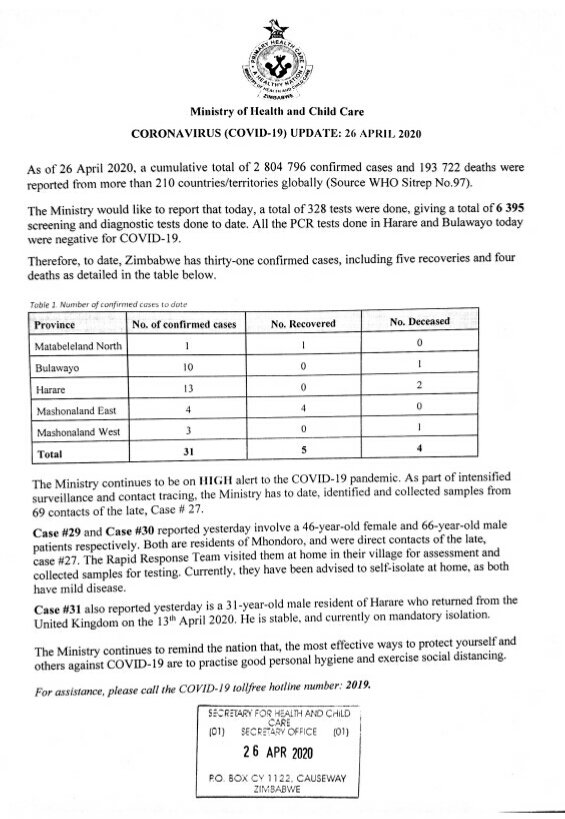