Mnangagwa says violent confrontation not the way to go 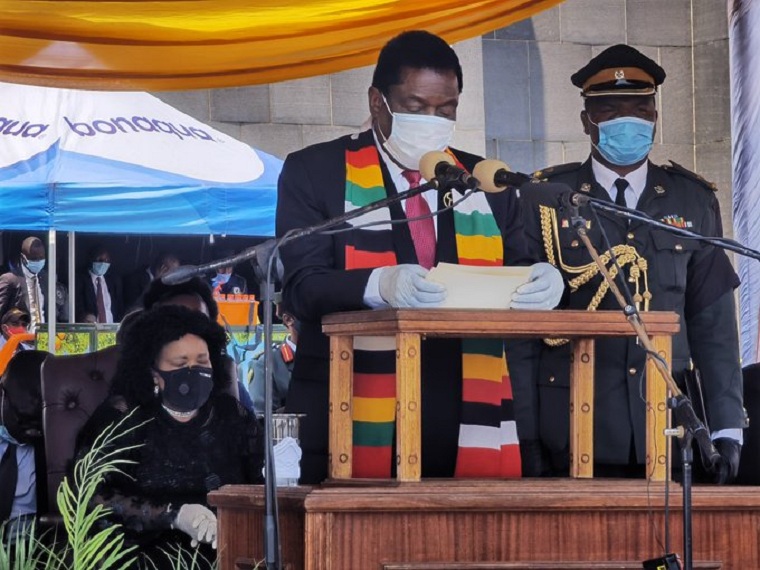 Zimbabwe President Emmerson Mnangagwa today criticised plans by some opposition groups for violent confrontation with government, and instead implored Zimbabweans to maintain peace and unity and work hard for the development of the nation.

Speaking at the burial of Brigadier General Ruphus Chigudu, who died on 24 September at the age of 64, Mnangagwa said the country’s security apparatus would deal with those threatening peace in the country.

“Those of us who are alive must remain united in defence of our hard won independence. Violence, destruction of property and making Zimbabwe ungovernable can never be democratic and is not what we fought for,” he said.

Mnangagwa stressed that the land reform programme which the government implemented in the last few years was irreversible, adding that some quarters of society were misreading government’s recent decision to compensate former white commercial farmers for the land improvements as a reversal of the agrarian reforms.

Under a deal recently signed with the farmers, government will pay an estimated US$3.5 billion for improvements that were done on the land.

“The land has come and it is now united with its people. It has come forever and is irreversible,” he said.

“There are those in our midst misreading what government constitutionally seeks to achieve in pursuit of a narrow agenda. They think they have now found a credible platform for mobilising against our administration and its government, they are desperate but they are doomed to fail.”

Mnangagwa said government was instead working hard to boost the country’s food security through ensuring improved utilisation of land, which heroes like Brigadier General Chigudhu dedicated their lives to liberate from colonial settlers, through various mechanisation programmes.

Born on 11 December 1955, Brigadier General Chigudhu participated in Zimbabwe’s war of liberation as a young man and rose through the ranks to command structures before joining the national army when the country attained its independence.

Mnangagwa described him as an “astute military man, unifier, a stalwart of the national struggle and a fearless cadre” who served the nation with “honour, loyalty and distinction.

“His contribution to Zimbabwe and SADC’s peace and security is commendable,” he said. –New Ziana