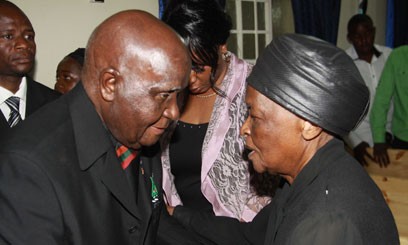 In a rare moment of national solidarity, the Movement for Democratic Change led by Morgan Tsvangirai today paid tribute to Victoria Chitepo, wife of former Zimbabwe African National Union-Patriotic Front chairman Herbert Chitepo, describing her as the epitome of fortitude, resilience and humility.

Chitepo died at her home yesterday at the age of 89.

“As a party, we salute the exemplary, selfless and heroic contribution by Amai Victoria Chitepo in ensuring that Zimbabwe attained independence from British colonial rule on April 18, 1980,” party spokesman Obert Gutu said in a statement.

“Amai Chitepo belongs to that very rare, heroic and gallant species of national heroines such as the late Ruth Chinamano,the late Sally Mugabe, the late Gogo Mafuyana Nkomo, the late Julia Zvobgo and living heroines such as Amai Maud Muzenda. These national heroines made an invaluable contribution in ensuring that Zimbabwe becomes a free and independent country after decades of colonial subjugation and exploitation.

“Amai Victoria Chitepo was the epitome of fortitude, resilience and humility. After her late husband, Herbert Chitepo, was gruesomely assassinated in Lusaka, Zambia,in 1975,Amai Chitepo never lost her revolutionary zeal and drive to selflessly fight for our independence. She single-handedly raised her young family and managed to instil national pride in all her children.”