Company part-owned by former US Secretary of State ditched after...

Says the audit report: “According to (ZESA Projects Manager) Ms. (Flora) Chikonye, the three companies were selected by a Committee made up of ZESA Holdings, ZETDC and ZPC staff. Ms Chikonye stated that the Committee based its selection on the fact that these companies were reputable and had a good track record in Africa.”

But, the auditors found, this was not enough to convince government, which ordered the project to be given to Sakunda instead. The OPC, the audit said, also cited indigenisation laws for its preference for Sakunda. This was despite the fact that APR also had a local partner, Zuva Petroleum.

The auditors pointed out: “The due diligence report stated that the directive by the OPC to perform due diligence on Sakunda’s submission was in line with Government’s policy on indigenisation per the ZimAsset programme. We noted however that the structure of the Sakunda-Aggreko partnership was similar to APR’s partnership with Zuva Petroleum. Both partnerships involved a local fuel supplier and a foreign plant provider. It therefore brings to question why indigenisation would have been used as a criteria to appoint Sakunda instead of APR.”

The auditors showed a comparison of Sakunda’s submission and APR’s offer. 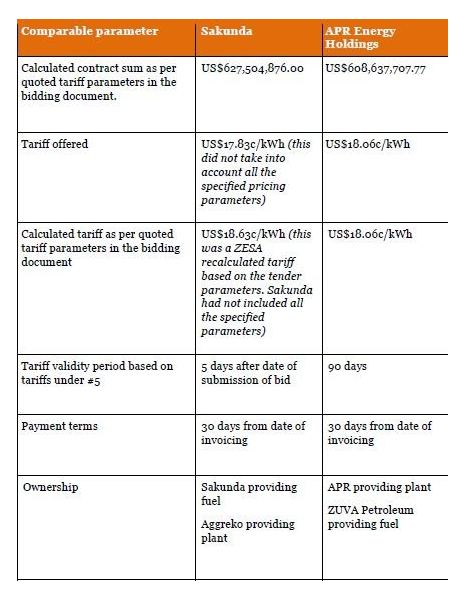 After Sakunda bagged the project, it went on to appoint Aggreko, a losing bidder, as a partner. Up to that point, Aggreko had previously made several failed bids to set up diesel power plants in Zimbabwe.

In November 2015, Tagwirei wrote a letter, accompanying Sakunda’s submission for the project, stating that he was partnering Aggreko.

“As the setting up of diesel generator plants is a highly technical area, it is questionable why Sakunda having presented its tender as the main bidder were awarded the contract,” the auditors said.- NewZwire