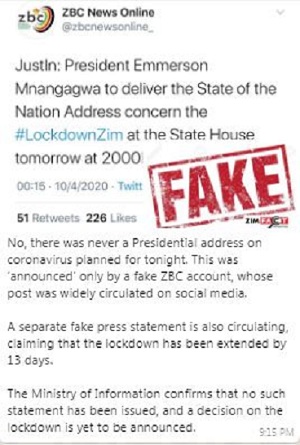 A Zimbabwean man who allegedly created and peddled fake Covid-19 news — and who was sternly warned last week by President Emmerson Mnangagwa — was arrested and has appeared in court.

Officials want him to face as many as 20 years behind bars.

Lovemore Zvokusekwa, 36, from Chitungwiza, appeared before a Harare magistrate facing charges of “publishing or communicating false statements prejudicial to the state”, as defined by the Criminal Law (Codification and Reform) Act.

A satirical statement — purported to be from Mnangagwa himself — went viral on social media last week. It claimed the president had extended the 21-day lockdown by “13 days only”.

At the time, Mnangagwa responded by saying it was absolute nonsense and vowed to make an example out of the person behind it.

“If we catch this person, it must be exemplary: they must go in for at least … 20 years’ imprisonment. We need to demonstrate that we don’t want false news to be circulated,” he said.

Zimbabwe has since extended the lockdown by 14 days.

It is the state’s case that Zvokusekwa originated and distributed the statement using his cellphone, a Huawei 6 Pro, the serial and phone numbers of which were supplied in court. The police in their affidavit claim that they traced some of the recipients — who have since turned state witness — and also found fake statements on the phone.

Zvokusekwa was remanded in custody. If found guilty, he faces a maximum of 20 years in jail after Zimbabwe last month published lockdown regulations that include jail terms for spreading falsehoods about the Covid-19 outbreak.

As of Monday, there have been 2 851 tests conducted in Zimbabwe, with 25 confirmed Covid-19 cases. Three deaths have been recorded, while two people have recovered.- TimesLive